Steven Van Zandt: ‘Streaming Is a Disaster for Artists. A Disaster.’ 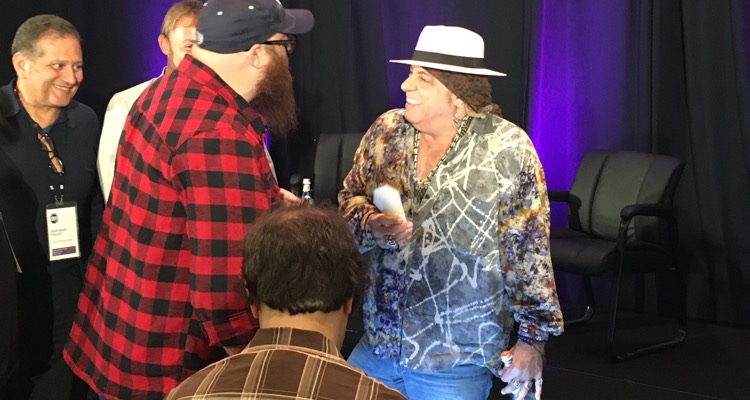 The rise of streaming platforms like Spotify, Apple Music, Amazon Music Unlimited, and Pandora has worsened the lives of artists, according to one of rock n’ roll’s most celebrated musicians.  Steven Van Zandt, a member of the Rock and Roll Hall of Fame and a core member of Bruce Springsteen’s E Street Band, was a keynote interviewee at the recently-held Making Vinyl conference in Detroit.

At one point during the interview, Van Zandt traced the ascent of grittier rock n’ roll to the portable 45 record player, which allowed younger fans to listen to music in the privacy of their rooms.  Previously, kids had to ask their parents to play records on the living room record player, where artists like Little Richard would never be permitted.

But in the privacy of a kid’s bedroom, the only requirement was that the volume wasn’t too loud.

“It was an interesting moment, but it shows you how sometimes technology can affect history,” Van Zandt said.  “[Without the portable 45 player], rock n’ roll might have been snuffed out.  Because at that moment, it was teetering on the verge of being snuffed out.”

But what about streaming?  How has that affected the trajectory of music in the 2000s?

Digital Music News asked Steven Van Zandt at the tail end of his keynote.  Here’s what he told us.

DMN: “I was really fascinated by what you said about the portable 45  player, and how that impacted the history of rock n’ roll.  That was mind blowing.  So let me ask you now, with streaming, maybe the portable 45 player of today, in terms of taking over in technology — is streaming helping creativity, hurting creativity, or maybe none of the above?”

Steven Van Zandt: “Well that’s a tough one, you know, in some ways the jury’s still out, it’s still kind of new.  The feeling right now is it’s not only hurting but virtually killed what used to be the industry.  By its nature, it’s a disaster for artists.  A disaster.

“And this matters, not to make people super rich.  But to make a living doing what we’re doing right now is almost impossible.  So that’s what’s coloring everything right now.

“On a positive side, of course everybody’s the distributor now, everybody’s a record company now, and that has good and bad qualities too.  Because everybody is accessible and everyone has access to the world, and that’s a wonderful part of it.  On the other hand, there’s a certain craft that needs to be learned, that needs to be mentored, it needs to taught.

“So it has its pros and cons, but mostly economically it’s a disaster that will never be fixed.”

“We can’t all teach ourselves everything.  So at the very least it’s diluting the creative process.  It makes it more available, more accessible, to get whatever you want to get out.  But it encourages you to get that stuff out too soon.  You can force development.  You must still have development.

“So it has its pros and cons, but mostly economically it’s a disaster that will never be fixed.  So we have to try to find new ways now to make a living doing this.

“One of the things is that SoundExchange came to me, which is a miracle.  This new law, it says digital radio has to pay artists to play their music.  Now that’s a wonderful thing, it doesn’t affect a whole lot of people but it affects people on my [Sirius XM] station.

“We have rotation like the old days.  When we pick our coolest song in the world this week, we play it six times a day for six weeks, with the hope that people maybe will buy it.  Or at least get it in their head and understand it and are really familiar with it.

“But that six times a day, for six weeks, pays that artist $6-7,000, which pays for that record.  And that’s the only way I know of that people can actually pay for the records they are making.  Other than that it’s just an expensive hobby.  So that’s one good thing right now, your digital radio is actually paying for airplay, and if you make it onto our station, you’re going to see some money.

“But other than that, everything has moved to the live venues now.  And the catch-22 is how do you get to those live venues if you’re not getting the airplay?  So we try to turn promoters on to these new bands, these thousands of new bands we’ve introduced.

“And once in a while it happens, a band will call us to say some promoter heard our song on your station, and added us to a festival.  And that’s what we hope happens.  We hope that people will get some kind of airplay enough for people to get turned onto them.  That’s all we can do right now.

“So, it’s complicated.  It’s still a new world, we’re still adjusting to it.   But it’s tough right now, for people to make a living doing what we do. “