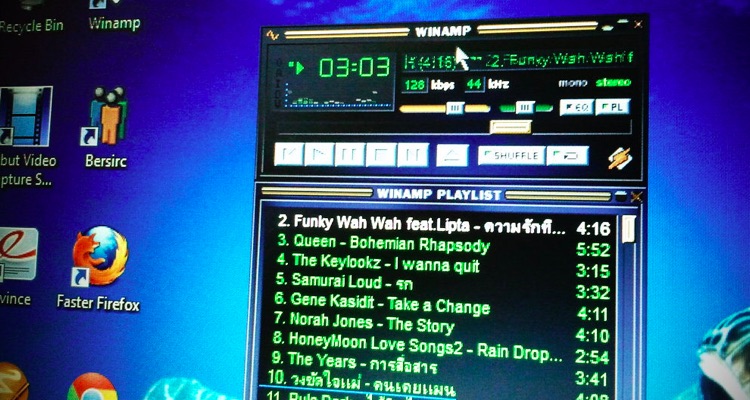 Winamp back in the day.

Winamp is looking to whip the llama’s ass in 2019 with a major comeback.

The brand-new Winamp will serve as an all-in-one audio app for music, podcasts, and possibly streaming services.

Winamp was a staple for music lovers in the late 90s and early 2000s.  Created by Nullsoft in 1997, the highly customizable Winamp became the standard from which all other desktop music players were judged.

AOL picked up the music player in 2002, but later sold it again to Radionomy in 2014.  2013 was the last time the desktop app saw an update.  Fast-forward to now, and Winamp isn’t compatible with modern operating systems like Windows 10.

But that’s about to change.  CEO of Radionomy Alexandre Saboundjian now says that Winamp is finally going modern and mobile.

“There will be a completely new version next year, with the legacy of Winamp but a more complete listening experience,” Saboundjian stated.  “You can listen to the MP3s you may have at home, but also to the cloud, to podcasts, to streaming radio stations, to a playlist you perhaps have built.”

Saboundjian says the war for the best streaming app on the desktop is over, but mobile is still a battleground.  He also noted that the mobile audio experience is a fractured and inconvenient place when switching between podcasts, playlists, and on-device music.

But what about streaming?

Saboundjian did not detail which streaming services Winamp would support.   And it’s highly questionable whether Apple Music, Spotify, Pandora, or other monstrous streaming platforms really need another player.

Meanwhile, services like Spotify, Google Play Music, and Amazon Music Unlimited have been branching out to offer support for podcasts to their users.

Radionomy will release Winamp 5.8 on October 18 to address compatibility issues with Windows 10.

A leaked version of this update has already been spread around the community, which prompted rumors before today’s announcement.  The fully revamped Winamp 6 update will not be available until next year.

And there’s one thing Winamp’s competitors can’t touch: the nostalgia factor.  Indeed, Winamp’s mobile comeback could be the best part of 2019 for mobile music listeners— that is, if the CEO is able to reach his lofty goals for the relaunch.