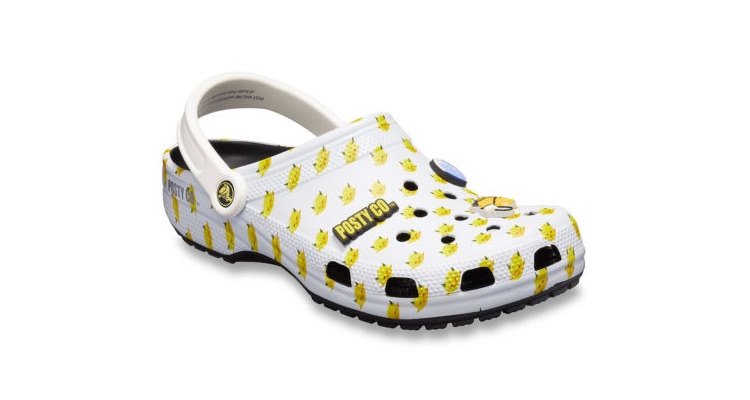 Yesterday, rapper Post Malone announced a partnership with Crocs to create a customized design. The resulting ‘Post Malone x Crocs’ sold out in less than 24 hours.

That Apple-style quick sellout was probably intentional, though the company says you’ll be able to get more next month.  And the anticipation builds…

The white clogs feature a yellow devil design along with six custom-designed Jibbitz charms. One is a re-creation of Malone’s famous tattoo, “Stay Away.” Another is the logo for Malone’s Posty Co.

The limited edition crocs were available for $59.99, which offers an extremely affordable alternative to Adidas’ Kanye-inspired Yeezy lineup.  A pair of Yeezys can easily tip $600, though the collaboration has also been wildly successful for Adidas.

Both deals offer a possible taste of similar partnerships ahead involving high-profile rappers.

Malone seemed to be a Crocs wearer heading into this, though that might have been the result of a covert sponsorship.  Either way, this is working for both sides, with Malone pointing to fan interest in a custom-designed pair.

If you’re interested in snagging that unique design, the Crocs website says you can sign up to be notified when the next batch is available in December.  Even though the special design is sold out, Crocs is offering yellow, black, and white shoes to Posty fans who want to sport his favorite colors.

Crocs is obviously happy with the collaboration and Malone’s endorsement.  Fittingly, Crocs Chief Marketing Officer Terence Reilly dropped the customary ‘we’re thrilled’ cliche in a statement on the partnership.  “We’re thrilled with how the Post Malone x Crocs Dimitri Clog turned out and excited about what’s to come,” Reilly stated.

Malone’s success suggests broader rapper/shoe collaborations ahead, though footwear brands are undoubtedly sensitive to possible image issues.  Just recently, Adidas indicated indicated that it would be sticking by its West partnership despite the rapper’s controversial deep-dive into politics and controversial comments about slavery and the 13th Amendment (which banned slavery in America).