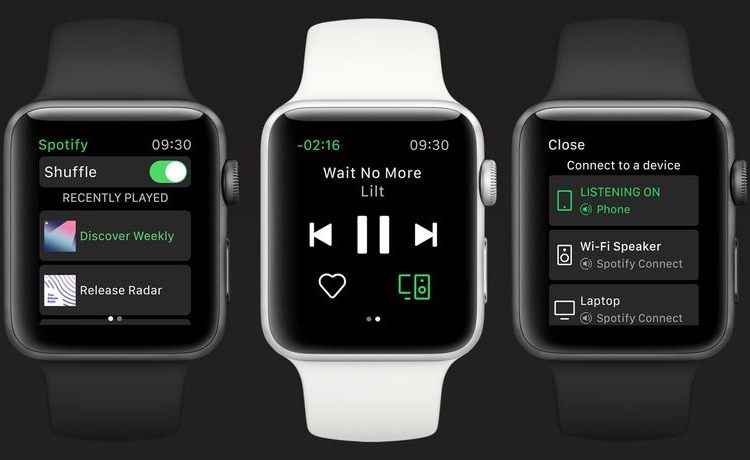 The official Spotify app for the Apple Watch is now available.

A beta test of the app earlier this month hinted at its existence.  Now, it’s a reality, though this is very ‘version 1’: the app is pretty barebones, with features like offline playback missing.

For now, the app allows users to control music through the Apple Watch for Spotify Connect devices. Users can also favorite music on the Now Playing Screen by tapping the heart icon.

Unfortunately, it’s impossible to stream songs directly to the Watch from the phone or over the Apple Watch’s LTE signal.  The lack of offline playback will be a disappointment to many who have been asking for the feature since the Apple Watch launched.

To receive the new app, Apple Watch users will need the latest version of Spotify (v.8.4.79) from the App Store. Spotify says the new experience is rolling out over the coming week, so it may take a few days to show up on your device.

The new app is a result of Spotify’s partnership with the Snowy app developer.

Project Snowy was a third-party app designed for Apple Watch to enable control of Spotify.  Spotify cited copyright concerns over the app and development slowly trickled to a stop.

Soon after, Snowy developer Andrew Chang announced that an official partnership with Spotify would see the app live on. Accordingly, Chang has been working with Spotify on the Spotify app that is releasing today.  Offline playback was listed as one of the features for Snowy’s development map, so it’s coming.

Chang’s dev log also reveals that he was exploring support for Siri controls and hand gesture movements to control playback of the app on the device.  That could be a small taste of what’s to come for the future of the Spotify Apple Watch app.