Time to mobilize the army?  YouTube appears to be going all out to defeat the European Union’s proposed Copyright Directive, particularly Article 13.

One particular act known as Article 13 would force platform holders to screen content for copyrighted material before it is uploaded.

“Article 13 as written threatens to shut down the ability of millions of people — from creators like you to everyday users — to upload content to platforms like YouTube. And it threatens to block users in the EU from viewing content that is already live on the channels of creators everywhere. This includes YouTube’s incredible video library of educational content, such as language classes, physics tutorials and other how-to’s.”

YouTube maintains that the provisions written into Article 13 could have unintended consequences should the act be passed.

“If implemented as proposed, Article 13 threatens hundreds of thousands of jobs, European creators, businesses, artists and everyone they employ.”

YouTube is now showing a small pop-up on select videos that asks the viewer to read more about Article 13. 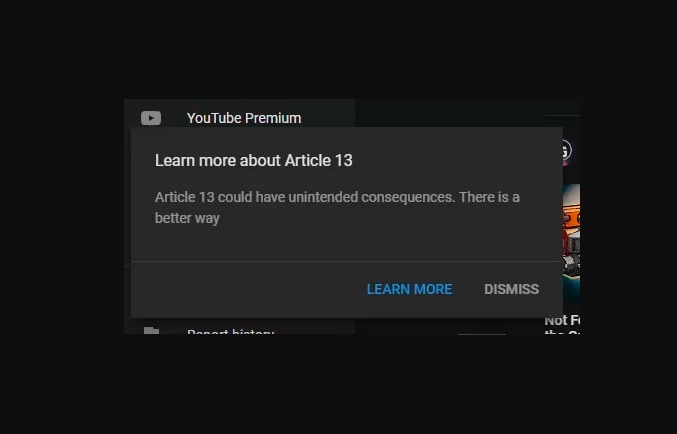 The site linked is YouTube’s Save The Internet campaign, which features a video that describes how the internet could change if Article 13 is passed.

Several YouTube creators who have addressed the topic are also featured on this page.

Critics of Article 13 are calling it the ‘upload filter,’ as the act forces the platform to screen for copyrighted content. YouTube already does this with its Content ID system, but it works after the video has already been uploaded.

YouTube claims to have paid out over $6 billion in total ad revenue to publishers and artists, but a label group could not verify those claims.  Separately, international label group IFPI has stated that it cannot account for even half of YouTube’s claimed payout of $1.8 billion in 2017.