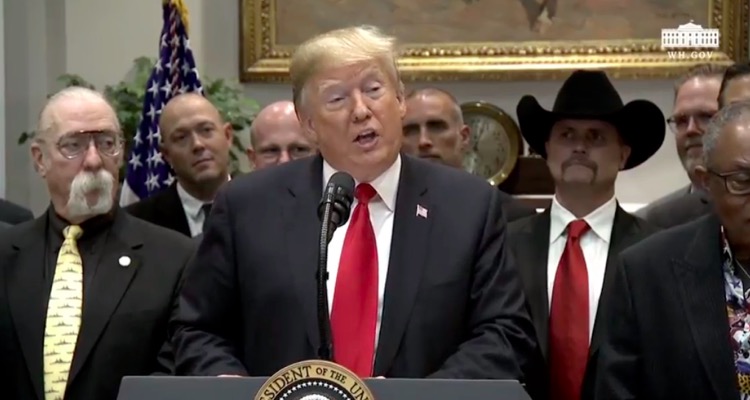 Despite unanimous Congressional approval and a presidential signature, a nasty battle over the next phase of the Music Modernization Act has emerged.

Earlier this month, Digital Music News first reported on a surprise entrant into the post-MMA world.  Instead of a one-horse race to fill the role of the MMA’s Mechanical Licensing Collective, or MLC, a surprise second choice emerged.

The American Music Licensing Collective, or AMLC, tossed its hat into the ring to compete with an NMPA-led group of major publishers and SoundExchange.

The group even attracted some superstar musicians, including The Police drummer Stewart Copeland and songwriting legend Rick Carnes.  “After decades of squinting into the murk of royalty apportionment we can now have an independent body to keep the lights on and the microscopes trained,” Copeland has rallied on AMLC’s site. “Support the AMLC!”

Sounded like the start of a spirited derby, with others potentially jumping in.  Just one problem: an ugly battle between the AMLC and NMPA has quickly erupted, with nasty allegations and signs of bad behavior emerging.

Shortly after the AMLC’s spirited coming out, at least two prominent board members quickly exited.  George Howard and Larry Mestel, both prominent and respected executives, were removed from the site after roughly 48 hours.  Neither offered any explanation for their departures — or even responded to an email.

Now, AMLC cofounder board member Jeff Price alleges that National Music Publishers’ Association (NMPA) president & CEO David Israelite is one of the reasons for the departures.

Specifically, Israelite has been accused of directly threatening AMLC members, demanding that they recuse themselves or face repercussions to their careers.  The NMPA represents major publishers like Universal Music Publishing Group (UMPG), Warner/Chappell, and Sony/ATV Music Publishing.

Price lobbed the very serious accusations on Thursday in an email shared with Digital Music News, the Wall Street Journal, the New York Times, Variety, and other publications.

“I thought it important that you know I have heard that David [Israelite] (as well as NSAI) is contacting AMLC board members… and/or entities that work with their companies and demanding the board members pull themselves off the board of the AMLC or suffer consequences to their careers or company,” Price wrote.

The charges, if true, are pretty serious.  Beyond simple predatory business practices and bullying, the NMPA’s members could be accused of anti-competitive behavior.  Earlier, the U.S. Department of Justice has clamped down on major recording labels for colluding over pricing and other predatory behavior.  Major publishers like Universal Music Publishing Group and Warner/Chappell are subsets of major labels, and also NMPA members.

The subsidiary relationships could potentially trigger another serious regulatory examination, depending on the validity of the accusations involved.

NSAI, or the Nashville Songwriters Association International, has also been accused of possible wrongdoing.

As first reported by DMN, the songwriting group is already rallying members to sit on the MLC board, ostensibly the NMPA-led MLC version.

Earlier, Price informed DMN that direct threats had been issued against members of the AMLC, but declined to specify the sources of those threats.

According to Price, direct threats against AMLC members could constitute tortious business interference, among other illegal and predatory business practices.

That sounds like the pre-game to a lawsuit, though Price has not indicated whether litigation will be pursued.  Though let’s be honest: once terms like ‘tortious business interference’ are tossed around, it offers a hint that lawyers are already involved.

This part of the email also hints at possible subpoenas ahead: “The good news is emails and phone calls are logged and it is a simple matter to assure this is not occurring.”

Separately, Price claims to have a recording of a phone conversation between an NMPA member company and Israelite, with some strong words issued against Price.  Beyond that, there are no further details on what was said in this call — or whether anything constituting tortious business interference or collusion was uttered.

Separately, we’ve spoken with a number of AMLC members.

None pointed to the type of predatory behavior outlined by Price.  That includes Benji Rogers, who largely pointed to positive feedback.  “I intend to stay and have had no pressure to leave,” Rogers told DMN.  “Actually the opposite. People seem to be excited about it.”

Others, including Rick Carnes, have declared their intention to remain on the AMLC.  Earlier, a source claimed that Carnes was being directly threatened by the NSAI, and potentially others.

We reached out to David Israelite to get his take on the matter.

So far, Israelite has yet to respond to the weighty accusations.  Also copied on the Price correspondence is Danielle Aguirre, EVP & General Counsel of the NMPA, though we’re not sure if Aguirre is being accused of any wrongdoing.

Whether Price has any ‘smoking guns’ against Israelite will be critical to proving the claims, though Israelite could fire back with claims of his own.  For example, if the claims issued by Price can’t be substantiated, Israelite could drag Price into a pricey defamation lawsuit.

Meanwhile, the AMLC’s remaining board seems prepared for a fight.  A major motivation of the creation of the AMLC appears to be ethically questionable practices proposed by the NMPA-led MLC group, including structures that would quickly shuttle unclaimed royalties into the hands of major publishing members — even if those rights don’t belong to them.