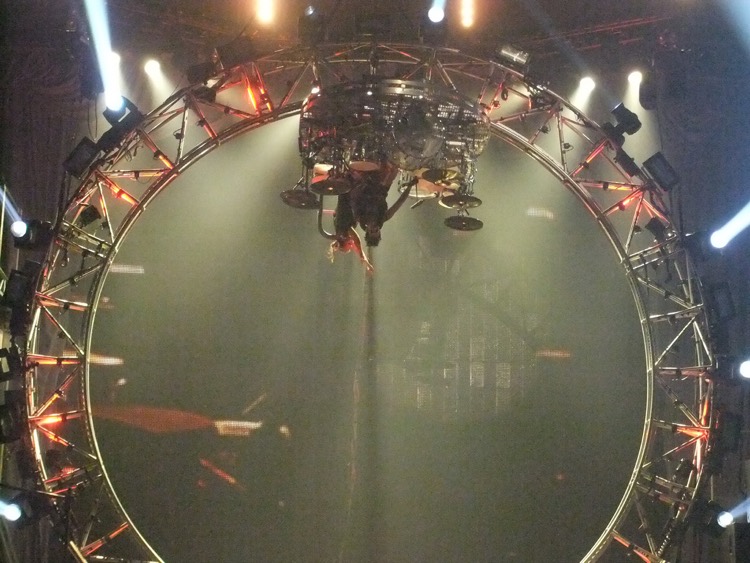 Can you really infringe a stage design?  Yes, according to Tommy Lee, who is accusing Travis Scott of ripping off his roller coaster-inspired set from several years ago.

For those who have yet to witness Tommy Lee drumming on a 360-degree roller coaster apparatus, here’s a quick catch-up.  Turns out that drumming upside down is harder than you’d think, but wildly entertaining.

But does copyright protect this groundbreaking combination of amusement and percussion?  Tommy Lee, who claims to have debuted the concept years ago, feels that his stage design has now been infringed.

In a blistering series of tweets and Instagram posts, Lee blasted Travis Scott for creating a roller coaster-style stage.  Of course, Scott’s entire Astroworld motif revolves around coasters and amusement rides, but Lee feels that this somehow crosses the line.

Travis Scott has been on the road for weeks, though Lee apparently just caught wind of the similarity.  “Just found out this f—king idiot @travisscott or someone on his team ripped off the 360 AND The Crüecifly! WTF!! Get an original idea bro,” Lee wrote.

It’s not clear if Tommy Lee has even heard of Travis Scott, despite the rapper’s enormous profile.

Just found out this fucking idiot @travisscott or someone on his team ripped off the 360 AND The Crüecifly! WTF!! Get an original idea bro…(swipe to see who did this shit first) BRB there’s more …

We’re not aware of any patents or IP tied to roller coaster stage sets, or how defensible a stage design like this one would be in court.

Undoubtedly, there are lawyers who would love to try the case, which offers the possibility of another frivolous lawsuit (with an equally ridiculous judgment).

So far, Travis Scott has yet to respond.  But if sued, the rapper’s legal team would probably argue that roller coasters are a core theme of Scott’s Astroworld motif.

Oh, but this gets even lovelier.  It actually turns out that Tommy Lee himself was sued for stealing his 360-degree drum contraption back in 2004, though the Crüe rocker prevailed.