Playlists Aren’t Everything. Here Are Some Other Critical Metrics to Track an Artist’s Success (Or Lack Thereof) 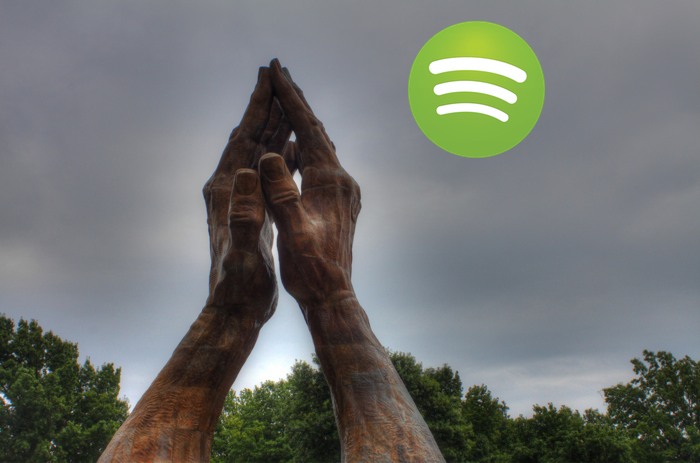 The God-like power of the playlist is both respected and feared within the music industry. But ignore these other metrics at your own risk.

A slot on a top-ranked playlist can transform obscurity into notoriety almost overnight. By brutal contrast, a removal can reverse those gains, and even exact a serious financial toll (and for evidence of that, look no further than the late XXXTentacion).

Those who disregard the power of the playlist may be playing with their careers. An artist that places well on playlists can expect bigger crowds at shows, better sales of vinyl and merch, and even juicy sync advertising and collaboration deals.

But is the playlist really everything?

In order to answer that question, we joined forces with Chartmetric, one of top authorities in streaming playlist tracking. Basically, this analytics company tracks everything related to playlists and the artists and songs they contain. But they’re also tracking a lot of other metrics — some tied to streaming playlists, other unrelated. That includes SoundCloud followers, terrestrial radio spins, Shazam recognitions, YouTube engagement metrics, and even TV sync plays.

We’ve also pulled information from other companies, including those tied into radio monitoring, sync, and other areas. What we learned is that success (or failure) across platforms is often interrelated, but not necessarily dependent upon one other.

So if playlists aren’t the only pathway to success, what else should an artist ‘success dashboard’ include? 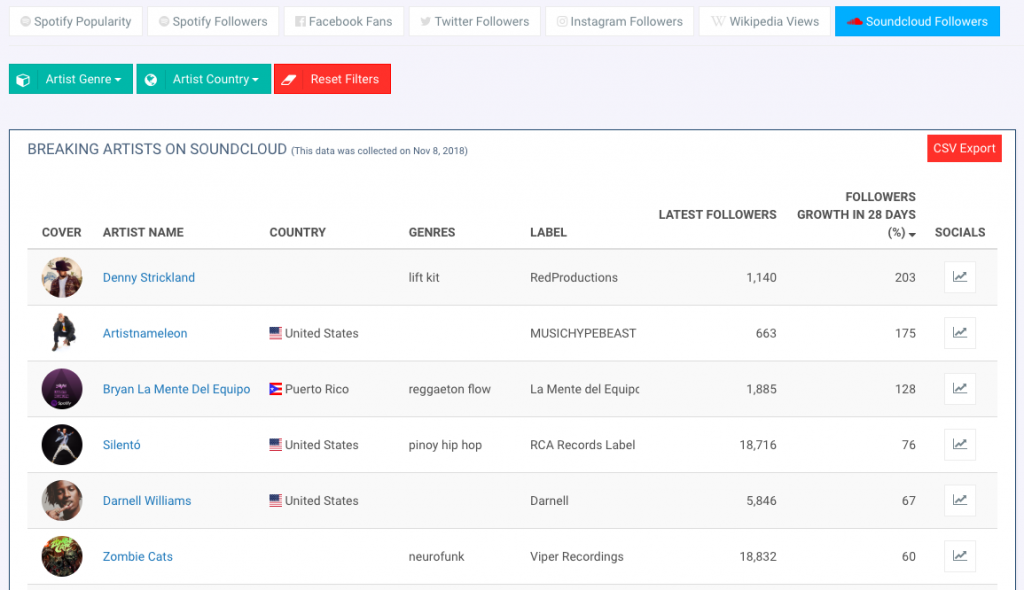 Perhaps the biggest example of a SoundCloud-bred rapper is Post Malone. Back in 2015, the unknown (and penniless) Post uploaded ‘White Iverson’ onto SoundCloud, the starting point for a smash hit. These days, Malone has 1.23 million SoundCloud followers, a deal with Republic/UMG, and is present across every important music platform.

“And I love SoundCloud, I think it’s such a dope medium for new artists who maybe don’t have the experience or any management or any team, just to put something up and see what happens,” Malone recently told Noisey. “I know [‘White Iverson’] was going to be big, I didn’t think it was going to be this big.”

Others, including XXXTentacion and Lil Peep, also bubbled on SoundCloud first. Outside of rap, one huge example is Billie Eilish, who first uploaded her tracks onto SoundCloud before eventually also getting signed to Universal Music Group (and more recently, Universal Music Publishing Group).

So who’s next?  Welcome to one of the most valuable data sets in the music industry.  Chartmetric is one of the players tracking the emerging SoundCloud set, based in part on follower percentage changes (see above).  The list likely includes future Post Malones and Billie Eilishes, with SoundCloud itself strategizing to better support emerging artists — before they’re even considered by Spotify playlist curators. 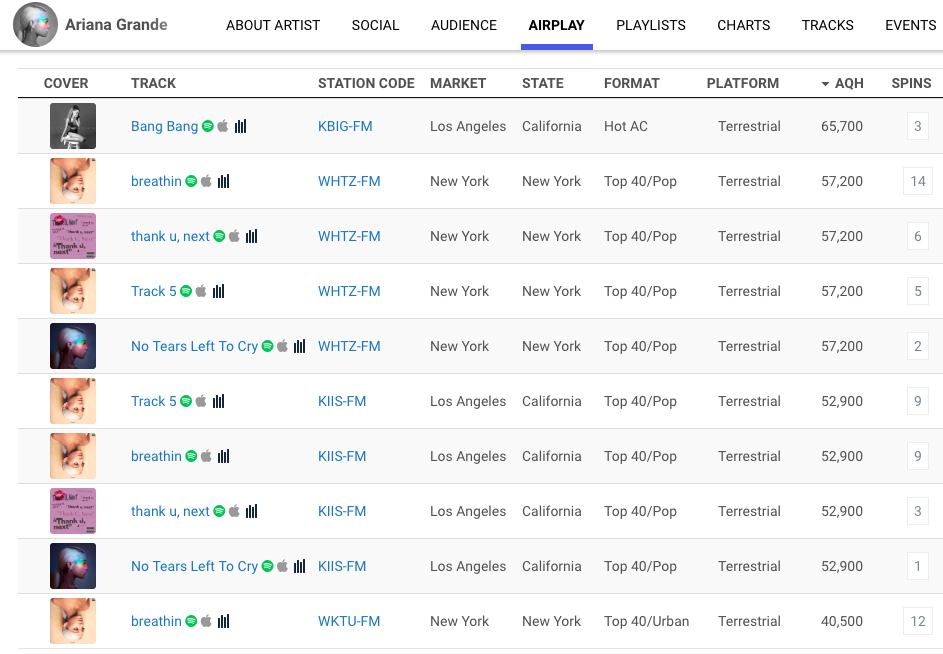 Traditional broadcast radio doesn’t matter for a lot of artists and genres. But radio stations are essentially broadcasting a giant playlist to a giant audience — and getting ‘added’ by a station can be a very big deal.

A major station can be influenced by previous success on a platform like Spotify. Sometimes, however, the streaming and radio worlds operate with relative independence. This can be true for oldies artists, but sometimes for newer artists as well.

Just recently, a duo known as Few Wolves started getting heavy radio play on a major station in Poland, with nearly zero traction on Spotify. Their label was already downgrading the group, until they somehow discovered the plays. The experience motivated the group’s manager to start an entire company (called WARM) dedicated to monitoring worldwide radio plays.

Most stories involving radio play aren’t so dramatic. But it illustrates that traditional radio still has a lot of power, though success on one platform often accompanies another. Chartmetric, for example, tracks several hundred radio stations in the US, and includes this as a tracking metric.

Shazam is a very unique influencer and data source — and an important one to monitor. Back when MP3s and downloads dominated the music landscape, a Shazam executive revealed to DMN that roughly 1 in 14 paid downloads originated from Shazam matches. While we lack similar figures on streaming, Shazam’s referral volume is still believed to be high.

These days, Apple outright owns Shazam, with data in mind. After all, a Shazam ID typically indicates a high level of interest in a track, and a great way to identify emerging songs and artists. Beyond that, regional Shazam IDs have also proven powerful for identifying audience connections and interest.

That’s not a playlist, but it’s the kind of thing that leads to better playlist inclusion. It’s critically good information, and something that demonstrates the potential for strong fan engagement.

Theoretically, the music industry is now completely global. Any song, any artist, and any trend can spread from continent to continent overnight (literally). But that typically isn’t how things play out in reality.

Instead, artists can frequently generate an impact within specific regions, with fan densities especially heavy in certain locales. That often prefaces a spread to other regions, though not always. And even broadly popular artists can connect with fans more strongly in certain geographical areas. 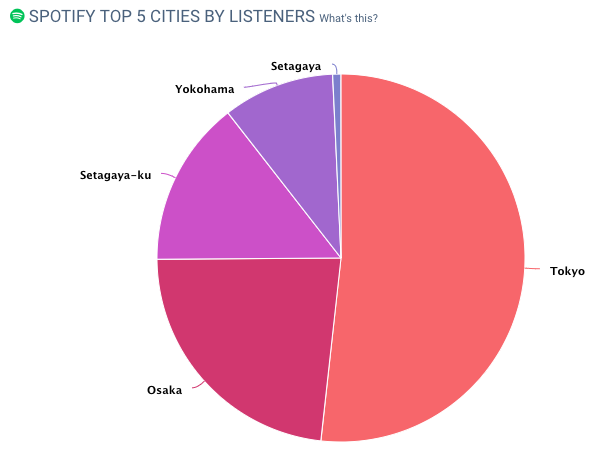 Several years ago, Pandora started tracking regional listening trends and opening that data to artists. The resulting intelligence was designed to help artists better route their tours, and fortify their local engagements.

Now, that science is expanding, with artists recognizing that ‘local heroes’ can survive if they’re super-serving regional audiences. Sold-out shows in Athens will pay the bills, but they’re not dependent on highly-trafficked playlists. 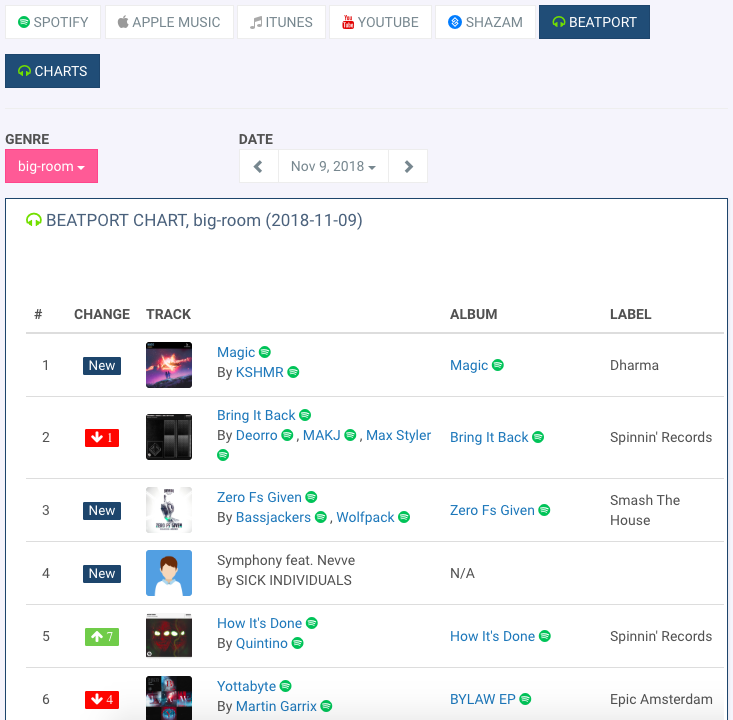 Recognize anyone in the above ranking (beside Martin Garrix)?

Unless you’re dialed into Big Room, the answer is probably not. Yet these are all artists making serious waves in clubs around the world, not to mention selling lots of downloads on Beatport.

But, downloads? Last month, Beatport shared a really interesting detail. It turns out that DJs can’t rely on streaming at shows, particularly with the hi-res files required to play a serious venue. So they download instead. That’s a big deal for EDM artists, especially since downloads offer a far higher payout than streams.

Beatport’s higher-quality downloads are more expensive, which raises the royalty payout further. Which means that if your music is demanded by DJs, you’re probably successful on Beatport and pulling in a nice return.

Make no mistake, this doesn’t prevent the same tracks from getting added to playlists on streaming services. And in many cases, streaming will create demand in clubs. But it’s not dependent on it, and it’s often better financially to be ‘big on Beatport’. 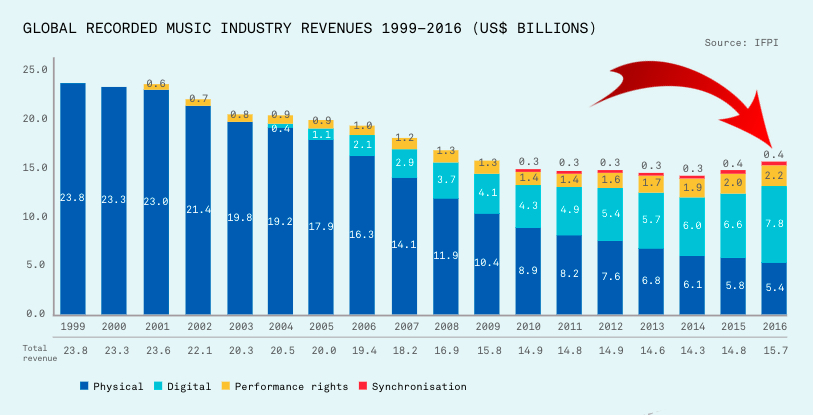 Sync has grown $100 million in just two years, according to the latest data. But this may be less than half of the real total (source: IFPI).

Synchronization, or ‘sync,’ revenues, come from a specialized license related to video. Whenever music is matched to video action, or ‘synchronized,’ a special license and payment is created.

What’s amazing about this revenue stream is that well-placed artists can generate serious revenues. In many cases, major brands like Nike will commission a composer to write music for an upcoming ad, and in many cases, pay the entire amount upfront (in return, they typically buy the song’s copyright).

Industry label trade group IFPI says that sync is still a small fraction of broader industry revenues. But sync-focused companies like Songtradr are actively expanding this market, and matching songs to an explosion of online TV and advertising content. That’s partly being fueled by brands, which are generating far more ads than their pre-internet days.

All of which means that a highly-successful sync composer could be relatively unknown on playlists. Then again, who cares: sync deals often come with nice upfront checks and recurring future work, especially when major studios and brands are involved.

This is connected to playlists, but ultimately measures something different.

Basically, the listener/follower ratio is exactly what it sounds like. A high ratio indicates lots of listeners but not many followers, relatively speaking. A 1:1 ratio, by contrast, indicates that people listen and follow this artist passionately, a sign of more serious engagement.

Here’s a quick sampling of bands tracked by Chartmetric. You can see a wide range of listener/follower counts: 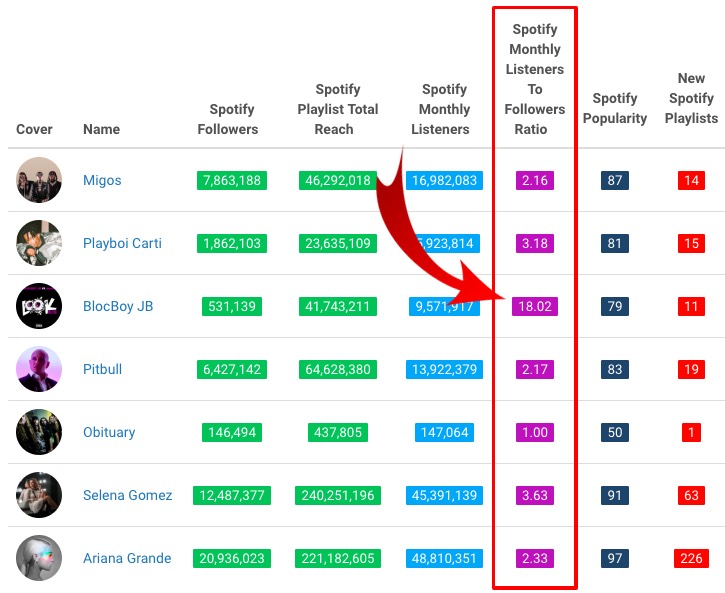 As you can see, there’s a fairly wide range of ratios here, with different takeaways.

Ariana Grande’s 1.66, for example, is impressive given her massive popularity and hugely popular hits. People are not only listening to hits, they’re connecting with the artist behind it all and waiting for more.

At the top, you’ll notice Obituary, which has a solid 1.00, which suggests a stronger, die-hard following, with playlists potentially less important to this group.

With rapper BlocBoy JB, a higher ML:follower ratio emerges, potentially because of this rapper’s monster recent collaboration with Drake (‘Look Alive’) and inclusion on huge Spotify playlists. At present, that includes multiple slots on Rap Caviar and Get Turnt, two of the largest playlists on Spotify that rack up serious streams.

And be warned: these data ratios need to be analyzed within a broader context. Oftentimes, they are signs of a broader trend, insight into fan engagement, or problem to solve. Like many metrics, they can be misleading when viewed in isolation.

Generally speaking, however, a solid listener/follower ratio often indicates that an artist has a healthy fan base, and one that is more likely to show up at gigs, buy merchandise, and care about the next releases. Whether that artist is on a popular playlist is less important (though of course, it helps).

Hopefully this article offered a broader perspective of different platforms and metrics out there, and helps you to track a wider range of success indicators. Big thanks to Chartmetric for partnering to make this piece possible!