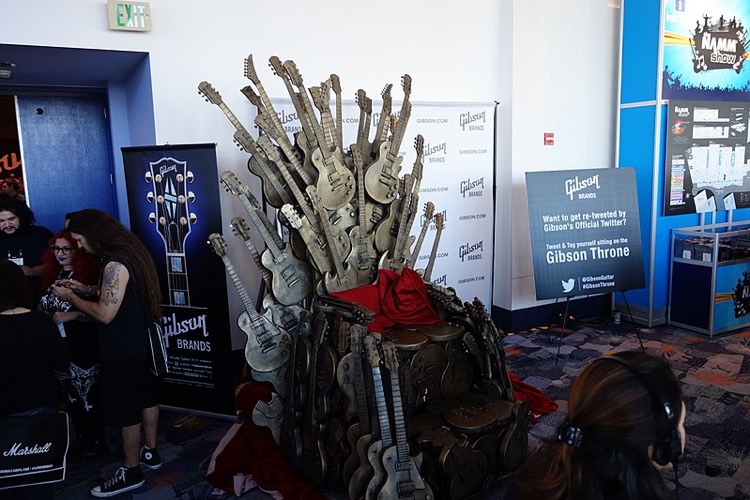 Gibson at NAMM 2015: What financial problems?

Gibson’s bankruptcy and restructuring prevented the iconic guitar company from appearing at NAMM last year. However, it now looks like the company will be attending NAMM 2019.

The newly released NAMM directory for its 2019 show in Anaheim, California reveals that Gibson will be back. The guitar maker will resume its spot at booth #207 on the show floor alongside PRS, ESP, and Marshall and Taylor.

Gibson’s newly slimmed down 2019 line will be on display, but the company will also highlight its sub-brands.  Epiphone, Kramer, and Steinberger instruments will be on hand, too.

Gibson might have a few reveals up its sleeve for the show, as well.

Gibson’s troubled bankruptcy and emergence shows the company is committed to revitalizing its core guitar business.  But the exact direction of the company has been unclear: last year, Gibson focused on the Consumer Electronics Show (CES) in Las Vegas.

With new leadership at the helm, the company seems poised to focus on its core instrument offerings.  CEO James Curleigh took the reins from former CEO Henry Juszkiewicz and is tasked with bringing this company back from the brink.

As part of the bankruptcy restructuring process, Gibson announced a new executive team to lead the company.  Gibson’s new leadership took over the company on November 1st, and the reappearance at NAMM hints that it is headed in the right direction.

The company’s slimmed down 2019 line-up features the iconic Les Paul and SG Standard but not much else.

The company looked into selling its iconic guitar factory in Memphis last year, too.  Gibson’s hollow-bodied guitar production will be moved to Nashville as part of the restructuring deal.

The Memphis factory produced hollow body and semi-hollow ES guitars.  It also employed around 65 staff, some of whom will be offered positions at the company’s Nashville operations.  The move to relocate guitar production is the first significant move undertaken by the company’s new CEO.