How Much Artists Make Per Stream on Spotify, Apple Music, Amazon, YouTube, Pandora, More (Updated for 2022) 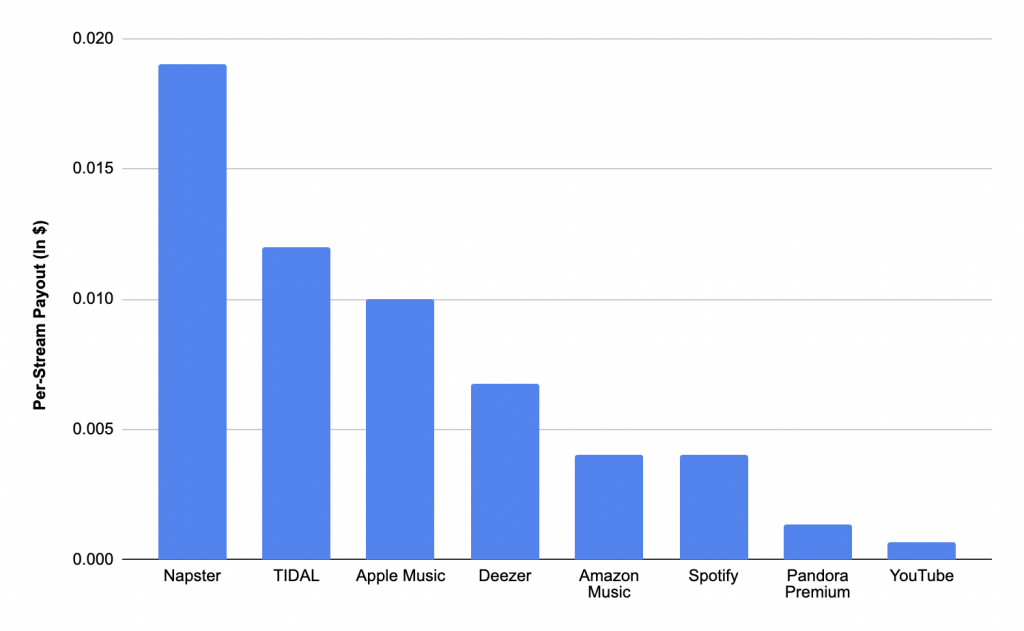 How much do artists make per stream? Reported per-stream payouts from top music streaming services (updated for 2021; click to enlarge)

How much do artists make per stream on the most popular streaming music services? Here’s a breakdown for Pandora, Napster, Spotify, Apple Music, Deezer, and more (updated for 2022).

Based on information directly received from artists and indie labels, as well as various published sources, we can rank streaming music services according to their per-stream rate. So how much do artists make per stream? Given extreme variations in payouts, the answer largely depends on the platform involved. Take a look.

The service had paid $0.01682 per play.  According to two sources – Information Is Beautiful and David Crosby – that number has steadily risen.  On average, Napster now pays out $0.019 per stream.  To meet the monthly minimum wage amount in the US of $1,472, an artist would need 77,474 total plays.

With 5 million paying subscribers, the service loses around $7.00 per user.  Unlike its rivals, however, Napster remains a profitable streaming music service.

Jay-Z’s beleaguered TIDAL remains a top player, at least in terms of payouts.

Nevertheless, the service had remained friendly to artists. But the service reportedly paid out $0.01284 per stream earlier this year. That number has fallen slightly to $0.0125, according to more recent data. Artists on TIDAL now need 117,760 total plays to earn $1,472.

How much does Apple Music pay per stream? Historically, Apple Music has paid artists much better than its streaming music rival, Spotify.

Artists on Apple Music would need around 147,200 plays to earn the US monthly minimum wage amount.

With Apple closely guarding its user metrics, it remains unclear how much Apple Music loses each year on the service as well as per user.

Launching several years ago in the US, French-based streaming music service Deezer still doesn’t have an established presence in the country.

Deezer recently reported an annual loss of $27 million, losing $1.69 per user. Deezer reportedly has 16 million users, with around 9.12 million – or 57% – paying for the service.

As with Napster, Apple, and Google, Amazon closely guards its user metrics.

Earlier this year, The Trichordist found Amazon paid indie artists $0.0074 per play. That number has now plummeted to $0.00402, placing it just above Spotify. Artists will now need around 366,169 total streams to earn the monthly minimum wage amount in the US.

How much do artists make per stream on Spotify?

Spotify’s per-stream rate ranks as one of the worst, and it appears to be falling. According to the latest data, Spotify pays most artists between $.003 and $.005 (one-third of a penny to one-half of a penny) for each stream.

Back in December 2019, you may have read our report on cellist Zoe Keating’s receiving a $753 check from Spotify, as compensation for 206,011 streams. Rounding up, the sum represents a per-stream royalty rate of $0.0037 – down from Keating’s 2018 Spotify royalty rate of about $0.0054. Separately, mechanical royalty firm Audiam also suggested that Spotify royalties have decreased despite rising subscriber counts and revenue.

Of course, there are plenty of Spotify alternatives. But as of 2022, Spotify remains the largest streaming music platform worldwide — which means you have little choice but to play ball with them.

Historically, YouTube hasn’t ever been an artist-friendly platform, thanks to its horrendous payouts.

But YouTube executives have now pulled a U-Turn, choosing to pay artists $0.00069. To earn the monthly minimum wage amount in the US, artists will need around 2,133,333 total plays on YouTube.

The video platform reportedly loses $174 million each year, with loss per user calculated at $0.17.

So, what’s our advice?

Once again, please don’t ever make a career out of your earnings on the popular video platform.  Trust us.  You’ll regret it.