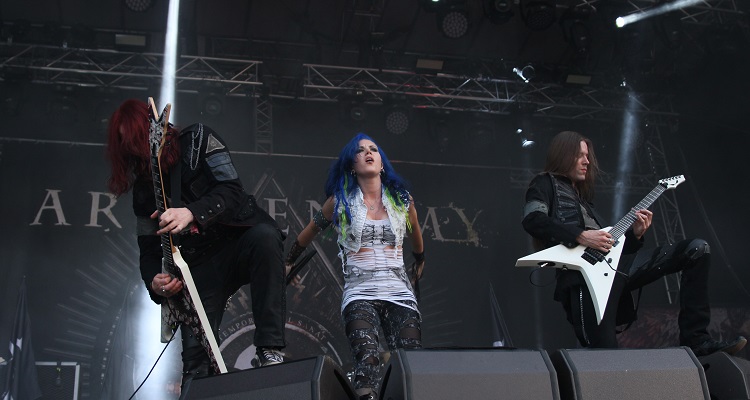 Just a single Instagram photo set off a blaze that would lead to death threats against J. Salmeron and metal band Arch Enemy.

Holding a Ph.D. in law, he goes under the professional name ‘J the Amazing.’

Yet, that’s far from how one metal band and their fans see him.

How a single Instagram photo and a well-organized troll campaign led to death threats, by J. Salmeron.

Earlier this summer, Salmeron snapped a shot of Alissa White-Gluz, member of metal band Arch Enemy.  He posted the shot on his Instagram.  White-Gluz loved the shot so much, she re-posted it in her account.

Salmeron wasn’t too thrilled about the move.  The designer hadn’t requested permission to use the shot.  So, he sent the designer an e-mail.

Salmeron generally licenses his shots for commercial use for €500 ($573).  Yet, to use the shot, he gave Thunderball Clothing an easy option – donate €100 ($115) to the Dutch Cancer Foundation.

That didn’t work out too well with the designer, which quickly reached out to the band.

Arch Enemy sided with the costume designer, which also doubles as a sponsor for the band.  The band’s members sent an e-mail to Salmeron, asking him to reconsider the request.

“I would like to ask why you are sending discontent emails to people sharing the photo of Alissa?  Alissa’s sponsors and fan clubs are authorized to share photos of her.  Thunderball Clothing is a sponsor of Alissa and Arch Enemy.”

“Generally speaking, photographers appreciate having their work shown as much as possible and we are thankful for the great photos concert photographers provide.”

This quickly sparked a blaze online.

The controversy, however, has led to both death threats against the band and Salmeron after a well-organized troll campaign.

To quell the issue, all sides – Thunderball Clothing, Arch Enemy, and J. Salmeron – have issued the following statements.

You can view Gossow’s response below.

I am reacting to the bully rally this photographer has set loose with his well-crafted (he took 6 months to get it done and released), well-timed mash-up of different subjects at hand.

The details often get lost in the emotion of the narrative — and the narrative is often controlled by who presents the story first.  Mr. Photographer threw a bunch of different things into one pot and highly emotionalized it.  Let’s differentiate:

Arch Enemy did not post any of his pictures, no breach of copyright there.  Alissa only re-tagged his image and got written permission of said photographer and actually got asked to re-post, after she fearfully removed the said photo.  She refrained from doing so.

Conclusion: Zero involvement of the band or Alissa in any of the addressed matters.  Leave Arch Enemy and Alissa out of it.

The lady re-posted the picture and said ‘thank you for wearing my custom made outfit’ along with it.

Copyright breach, as this can be interpreted as commercial use.  Not intentionally, because she wasn’t aware of that fine line — a lot of people on the internet are not, actually.  Anything you re-post is a breach of copyright actually.  She removed it as well immediately.  She did not react to the donation request because she was not sure if it was a scam.

Donating to a cancer research fund is not going to buy her the rights to use the photo commercially.  Only a paid invoice to said photographer would do.  So why didn’t he just invoice the 500 EUR and went ahead and donated it to said charity?  That would have been much more transparent in every aspect.

The internet hate campaign has destroyed Marta’s business – all existing customers have cancelled their orders and/or returned their orders.  She has received numerous death threats, accusations of being a Nazi, and worse.  She has closed her shop she built up for 8 years over this.  Is [her] mistake really that severe to justify this?  NO.  Is it justified to destroy an artist over this?  NO.

This is an unfortunate situation and a private business conversation that was never meant for public consumption (unethical and contrary to the code of conduct for European lawyers) was being abused for this campaign.  I was doing my position in my efforts to aggressively represent and protect my client and her business partner.  I’m sorry that this has been made public and the issues are now misconstrued.  I am personally shocked by the fact a business dispute turned into such a destructive wave of hate.

The claim I had him blacklisted with all agents, festivals, etc. is false!  I did inform my circle of people I do not want him in the Arch Enemy photo pit again.  I did not ask any promoters, festivals, magazines or whoever to ban him.  Mr. Photographer, give me one person who has removed you from their payroll because of me.  Nobody?  Thank you.

Why I changed some words in my previous posts – I received a legal letter from said Mr. Photographer asking me to, otherwise he would pursue me legally for my wordings.  The same happened to Alissa and Jeremy Saffer, who took his entire post down.  So those going out on the fence defending us are being silenced.  Freedom of speech?  No, I don’t think so.  I’m sure I will have to edit some of this post as well because I expect to receive a legal letter from him again within the next 24 hours.  Just saying.

Oh, and I took away the word sheep because those people who damaged Marta beyond repair, who are threatening Alissa and me in very serious ways are not sheep – they are much worse.  They are bullies.

We wish to move on from this and wish Mr. Photographer the best with the career.

You are welcome to discuss on my Facebook page – no comments disabled.  I will not tolerate any threats concerning my person, my family and my friends.  These will be pursued.

Thank you for your time to read this.

“As many of you seem to follow this story, here’s an update, and a final statement (you can see my previous statement and an apology from December 28 in my previous post).

The photographer, J. Salmeron, accepted my apology for reposting the photo he took, without having his permission, and as this was his request, I made a donation to the charity organization of his choice (the Dutch Cancer Society).  I believe we can say this ends the dispute between us.

However, as I’m not able to handle the amount of hate and threats that I received and keep on receiving, I decided to do what I think is best in this situation.  To end the being known as Thunderball Clothing (it’s hard to use a word “company” here, as since day one it was just one person – me).  I apologize for not being strong enough, and for not being next Internet hero that keep on saying “haters gonna hate”.  Within last 2 days I received literally hundreds of comments and messages that I’m a whore, a nazi, a communist, a worthless cunt, and that I either should quickly die, or that I should kill myself.  There is no anger in me, and I apologize everyone that felt hurt or upset by this situation.  Anyway, there is no Thunderball Clothing anymore.  You won.

“While our video and article will stay up, having answered to various accusations, and seeing parties on both sides of this dumpster fire receive death threats, we’ll start to lower the attention placed on this Arch Enemy situation.  We have made our position abundantly clear, and feel that we cannot, in good conscience, add fuel to a fire that could, potentially, result in threats being made against anybody (whether on our side or that of the band).

We thank everyone for the overwhelming support and urge anyone who feels that it’s a good idea to threaten anyone, to not do so.”