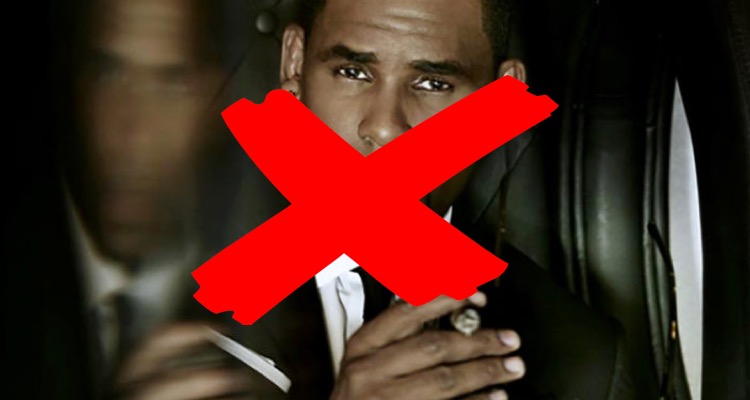 R. Kelly no longer has any sympathizers in the music industry.

In a lengthy letter, she explained that she would pull her 2010 collaboration with R. Kelly on iTunes and on streaming music services.

Multiple artists have since confirmed that they would do the same.  These include Celine Dion – ‘I’m Your Angel’ – Chance the Rapper – ‘Somewhere in Paradise’ – Ciara – ‘Promise (Go and Get Your Tickets Mix)’ – and the Pussycat Dolls – ‘Out Of This Club.’

Most recently, the state of Illinois has rejected a proposed spring break concert that would have featured Kelly over ‘security concerns.’

This has all come following the controversial airing of Lifetime’s Surviving R. Kelly.  The docuseries interviewed multiple alleged female survivors of sexual assault, abuse, and harassment at the hands of Kelly.

Now, as the #MuteRKelly campaign continues, the artist’s label, RCA, has put his latest record on hold.

Not dropping R. Kelly, but not allowing him to work on his latest album.

According to a new report, RCA/Sony has put the embattled artist’s “new music on ice.”

Sources say the label will no longer produce any of his new music.  RCA/Sony also won’t put any money behind any project, and will also not release additional music.  The label now awaits the results of a criminal investigation launched in Georgia.

Kelly reportedly remains furious over the move.  He had been in the studio recording new music to fulfill his contractual obligations.  This requires two new albums.

Kelly also remains upset that RCA/Sony will no longer furnish money to record his music videos.

Despite his label’s decision, the beleaguered singer has released new music on SoundCloud and on social media.

As calls for the label to drop Kelly have grown, RCA/Sony faces a tough spot.  Should the label give in, Kelly could take executives to court.  Should RCA/Sony release new music, the label would face a public relations nightmare.  Kelly may also turn around and drop his label ahead of his contractual obligations.

Other artists have also reportedly turned R. Kelly down for new collaborations.