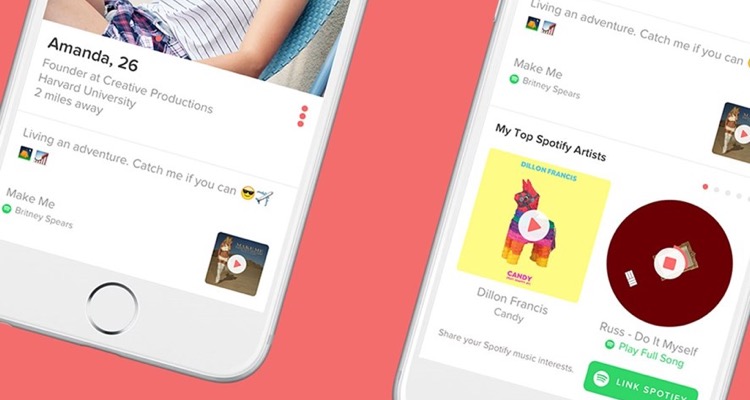 Spotify integrated with Tinder in 2016 to allow users to share some of their favorite songs and albums on their profiles.

Tinder used the data in its algorithm to help those with similar music tastes match more frequently.

Spotify has extended the integration this week with a new song-sharing feature for Tinder users. Users can now share a small clip of their favorite songs directly in Tinder chat. Any song that is available on Spotify can be shared within the app.

Once shared, the snippet will play 30 seconds of the song.

The only caveat here is that this is a web-exclusive feature, and not available on mobile just yet.  The shared clips cannot be accessed for mobile users, making for a frustrating experience for the primarily mobile-focused app.

Neither Tinder nor Spotify has made any announcements about the feature, so it’s possible they’re testing it before a mobile roll-out.

Sometimes features that are in testing don’t make it to mobile versions, so it’s impossible to say whether this will get a broader announcement.

Spotify has been looking for ways to diversify itself and better embed itself in the mobile experience.  Google Maps, Waze, Facebook Messenger, Nike+, and the Starbucks app are just a few Spotify-integrated apps aside from Tinder.

Recently, Spotify also announced a partnership with Samsung to appear as the default music player for the manufacturer’s smartphones and tablets.

Spotify has had a significant focus on expanding into new markets, too.

That’s because music streaming services in the United States may be reaching a point of saturation in 2019.  Outside of going outside of the U.S., Spotify’s integration with other popular apps puts it in front of users who may subscribe to another service.

The ease of integration with major apps like Google Maps and Waze makes Spotify more attractive than music services lacking integration.  At least until competitive streaming apps catch up.