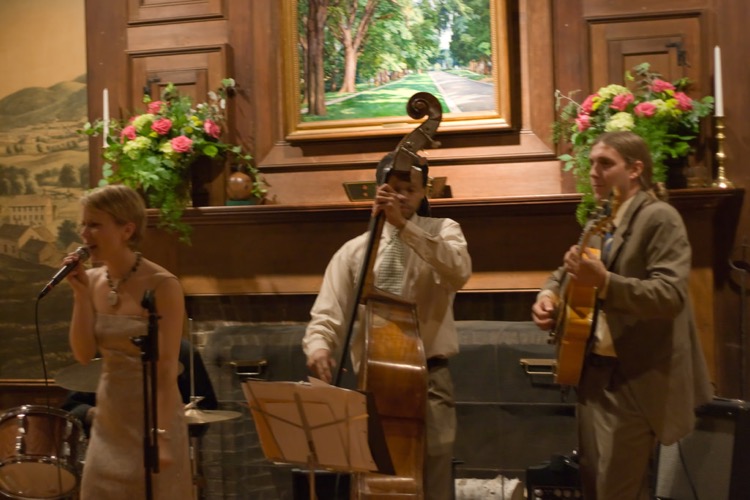 How much should a band charge for a wedding?

If you’re interested in booking more wedding gigs for your band, that’s a question you might be asking yourself right now.  You want to come up with the right price to entice couples to book your band for their receptions — but also walk away with a decent and fair payment.

With that in mind, you and your band should do whatever you can to make sure you land on the higher end of that spectrum. Fortunately, there are some simple ways that you can go about doing that.

Here’s how your band can break into the wedding scene and start benefitting from it financially in a big way.

Create the Right Look For Your Band

If your goal is to have your band start playing at weddings, you’re going to want to make sure that you have the right look for it.  You’re probably not going to book a ton of gigs if you dress in leather jackets and ripped jeans all the time.

You and your band should have a professional photographer take photos of you.  You should be all together, looking your best.  And, for some great action shots, have the photographer snap some pics of you playing an actual gig (not in a dingy dive bar, of course).

You don’t necessarily need to be wearing tuxedos in the pictures, but you should dress up so that couples can see who they’ll be hiring to take the stage at their wedding.

Simply stated, couples are going to be more likely to book your band if you have the right look.  So take a step back before you decide to make a wedding push and see where you can make improvements as far as your band’s appearance is concerned.

Add New Pieces to Your Band

Does your band currently consist of an electric guitar player, a bass guitar player, and a drummer?  This is a good start.  But you’re probably going to want to add a few new pieces to your band if you’re going to book any gigs.  You and your band members should be able to play as many different instruments as possible to show couples that you’re serious about playing at their weddings.

For example, does anyone in your band play something like the saxophone?  If so, it’ll give you a leg up on your competition. And if not, you should look for someone who can play the sax and ask if they’d like to play with you during weddings.

By working two or three more instruments into the mix, you’ll make your band a lot more attractive to couples searching for someone to play at their weddings.

Decide How Far Your Band Is Willing to Travel

If your band is only planning on playing at weddings in your specific city or town, you might cut down on prospective gigs.  You should open yourselves up to traveling as far as you have to in order to play at weddings.

It might not make financial sense to drive five or six hours for a single wedding gig.  But it shouldn’t be out of the ordinary for your band to travel a few hours away every weekend to put in work at a wedding.

Sit down as a band and figure out how far each of you would be willing to travel for weddings.  It’s good to be on the same page so that there isn’t any debate later when an actual gig comes up.

Answer the Question: “How Much Is a Band for a Wedding?”

Part of the reason most bands decide to start working at weddings is because of the big paychecks that are often involved.  You can make a lot more money playing at a wedding than you can playing at some seedy bar with only a handful of people in attendance.

But with that being said, you and your band will have to research the question “how much is a band for a wedding?” in your area and try to find out the answer.  This will help you to provide couples with a price for your services.

By testing out some sweet spots, you can generate the right price for your band’s services.  It’ll ensure you feel good about the money you’re accepting to play at weddings.

Make Sure Your Band Is Prepared to Play Wedding Songs

You and your band are obviously not going to be allowed to show up at a wedding and run through a bunch of your original songs.  You’re also likely going to be asked not to play certain songs that have become wedding cliches over the years.

Instead, you’re going to need to play the hits that people at your wedding know and love. It’ll fill up the dance floor.
Some good songs to play include:

Put Together a Video of Your Band in Action

The best way to convince couples to pay top dollar for your wedding band is by putting together an amazing video of your band in action.

Ideally, you should set up a camera once you start playing at weddings and take a video that showcases what your band can do.  Make sure to include a lot of reactionary shots to really sell how much fun people have when your band is playing.

If you’re just getting started, you can also stage a show to gather footage for your wedding video. It’ll allow you to show couples exactly what they can expect from your band.

Posting something on your website is also a good idea.   Here’s a quick guide on how to make a website for your band.

Another great way to drum up some interest in your wedding band is by attending wedding conventions.  These conventions attract brides and grooms from all over the place and will give your band the exposure it needs.

Assemble a strong setlist for wedding conventions and put your heart and soul into your convention performances.  You could very well convince someone who was thinking about going with a DJ to go with a band instead.

Try to show off your versatility as a wedding band during conventions as well.  There will obviously be other bands in attendance, and these options will also attract interest from couples.

But you can really set yourself apart by showing off how unique your band is.

Get Your Band Ready to Meet With Brides and Grooms

Before brides and grooms decide to book you for their weddings, they’re likely going to want to sit down with your band and speak with you.  Your band needs to be prepared for these meetings.

There should be one person who does most of the talking during meetings. This person will be designated to discuss everything from your band’s wedding setlist to your band’s price.  They’ll also have to answer any questions that couples might have.

Your goal should be to do whatever it takes to put couples’ minds at ease. They should feel comfortable with your band’s professionalism and with the approach you take to playing at weddings.

As long as your band plays great music and offers great prices, it shouldn’t be long before you’re landing wedding gigs.

At that point, you should start to ask happy couples to leave positive reviews for your band. This will do more for your band than all of the other tips listed here.

After people see that other couples have been happy with your wedding band, they’ll be more likely to book you for their reception. It won’t be long before you can up your prices and ask couples for even more money for gigs.

There isn’t an easy answer to the question, “How much is a band for a wedding?” It really all depends on how good your band is and where your band is located.

But your band could potentially make a lot of money if you put the proper time and effort into playing at weddings.  If you’re committed to the cause, you could quickly start generating thousands of dollars for every wedding you play.