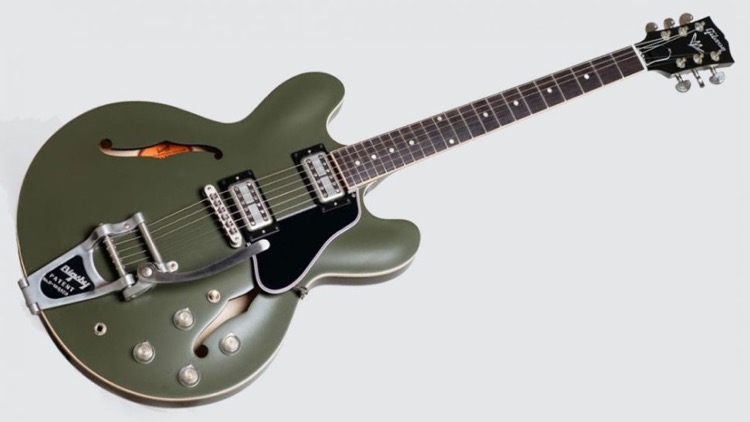 Gibson is re-issuing the model 2013 ES-335 with the addition of Cornell’s signature.

Chief Merchant Officer Cesar Gueikian says Cornell was one of the most iconic singer/songwriters of a generation.

“It is our honor to release this tribute ES-335 in his memory. It’s a guitar Chris fell in love with and which became a part of his creative expression. Chris was a special artist, and we hope that this guitar will inspire fans to find their sound, and inspiration, just like Chris did, for many years to come.”

The guitar was officially unveiled last night at the Chris Cornell tribute concert in Los Angeles. The concert will feature members from Soundgarden, Temple of the Dog, Audioslave, Foo Fighters, Metallica, and Ryan Adams.

The concert was held to benefit The Chris and Vicky Cornell Foundation as well as The Epidermolysis Bullosa Medical Research Foundation.

Only 250 of these Cornell Tribute ES-335s will be produced, and Gibson donated two to the show as prizes to raise money for both organizations.

Cornell took his life in 2017 in a Detroit hotel room.

A Detroit police report revealed that Cornell was found on the bathroom floor with blood running from his mouth and a red exercise band around his neck.

Cornell was pronounced dead at the scene by 1:30 am. The death was ruled a suicide, but Chris’ wife Vicky Cornell has disputed that statement. She maintained that if Cornell took his own life, he did not know what he was doing and “drugs or other substances may have affected his actions.”

Several stars who performed at the tribute concert got emotional during their sets. Eddie Vedder cried after his tribute to the late singer.