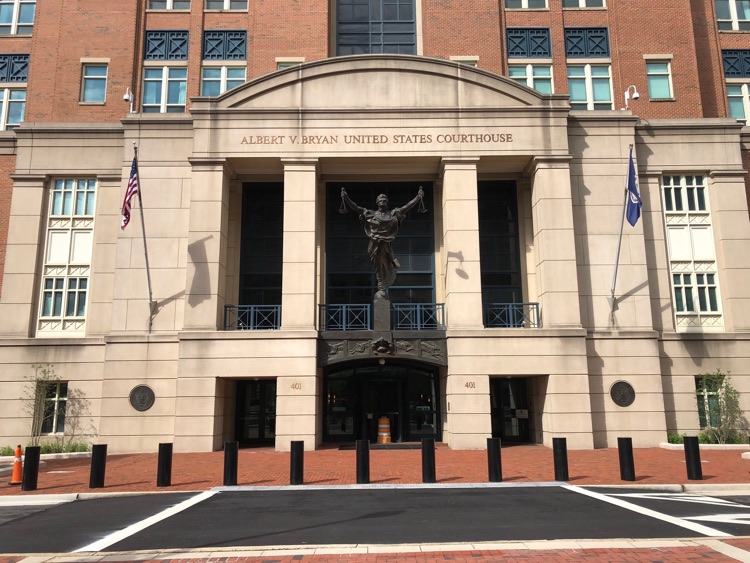 U.S. District Court for the Eastern District of Virginia, where the Recording Industry Association of America has just suffered a serious defeat against FLVTO.biz.

A U.S. federal judge has just tossed a major lawsuit filed by the RIAA against Russian stream-ripper FLVTO.biz, as well as associated site 2conv.com.  Both are among the largest YouTube stream-ripping sites on the planet.

Initially, attorneys on both sides were debating whether the State of Virginia represented a proper venue for litigation against the global YouTube conversion site.  But Hilton’s decision not only bars the case from being heard in Virginia, it also prohibits a refiling in another US jurisdiction, including California.

The RIAA, which filed the suit on behalf of major label groups Universal Music Group, Warner Music Group, and Sony Music Entertainment, was widely expected to coast through this lawsuit and establish a serious precedent against YouTube stream-rippers.  Instead, FLVTO.biz owner Tofig Kurbanov aggressively fought back, potentially opening a major loophole for foreign-owned stream-rippers.

As it stands currently, FLVTO.biz, 2conv.com, and a litany of other foreign-owned YouTube stream-rippers are operating legally in the United States.

Kurbanov, who operates both FLVTO.biz and 2conv.com from Rostov-on-Don, Russia, hired a serious team of US-based litigators to combat charges.

“We are thrilled to report that the Court today dismissed this action for lack of jurisdiction,” attorney Val Gurvits of Boston Law Group, PC emailed Digital Music News.  Boston Law Group is one of three firms hired by Kurbanov to battle the RIAA’s suit.

Since the start of this case, DMN has been unable to establish any communication with Jenner & Block.

Interestingly, Kurbanov never set foot in the United States.  In fact, the site owner doesn’t even have a visa authorizing travel into the U.S., though most likely, the RIAA and Jenner & Block weren’t even expecting Kurbanov to respond to the initial filing.  In fact, Virginia was likely chosen to extract a quick victory given its faster case processing, a strategy that has now backfired.

Boston Law Group characterized this strategy as an abuse of the legal system, and a bullying tactic that has now been curtailed.  “This decision goes a long way towards curbing the copyright owners’ misuse of the US legal system to bully foreign website operators,” Gurvits relayed.

“All too often, plaintiffs file actions in US courts against foreign defendants that have no connections with the US – and all too often foreign defendants are subjected to default judgments for failure to appear in a US court.  We are happy we were able to defend our client from having to defend this action in a US court thousands of miles away from where the relevant business activities take place.”

The RIAA, likely stunned by the outcome, is considering its next moves.

“Just learned of the news ourselves,” the RIAA’s Cara Duckworth Weiblinger emailed DMN on Tuesday afternoon.  “We’re considering all our options.”

It’s unclear what those options are at this stage.  Without the ability to refile in another U.S. jurisdiction, the RIAA could be forced to appeal the outcome and hope for a reversal.  If that doesn’t happen, litigation may have to commence in Russia’s court system.

Foreign litigation sounds extremely complicated, and explains why the RIAA and Jenner & Block initially tried for an easy win in the States.  That tactic will be far more difficult to deploy moving forward, thanks to this decision.

“Users may access the Websites from anywhere on the globe and they select their location when they use the Websites,” Hilton opined.  “Plaintiffs make the contention that Defendants’ tracking of where the users are located and use of geo-targeted advertisements demonstrates that he was targeting Virginians and Americans.

“This is an attenuated argument as tracking the location of a user does not show targeting of the user or their location; instead it is merely a recording of where the user’s unilateral action took place.”

Then, the stunning blow: “Due to the Court’s finding that personal jurisdiction is absent… the Court need not address whether transfer to the Central District of California would be appropriate as that venue would also be without jurisdiction.”

Beyond the legal channels, legislative options may also be available.

Just recently, Australia passed harsh laws against stream-ripping sites like FLVTO.biz, though Australia represents a sliver of total traffic to these sites.  Whether a similar anti-ripper update could happen in America is unclear, though the law would only pertain to US-based traffic.

The industry recently proved its ability to pass pro-copyright legislation with the Music Modernization Act (MMA).  But landmark laws like the MMA don’t happen everyday — and the RIAA may have lost a big chance to insert some anti-ripper language into the extensive body of law.

More as this develops.  We’ll have the full case document posted soon.