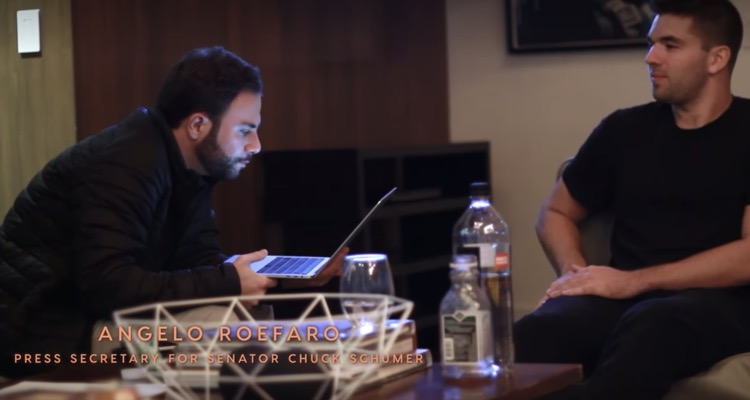 Press Secretary for Chuck Schumer Angelo Roefaro (l), appearing in Netflix’s recent documentary, Fyre: The Greatest Party That Never Happened.  McFarland (r) was out on bail and renting a high-priced hotel suite at the time this interaction was filmed.

Both Netflix and Hulu have released searing documentaries detailing the Fyre Festival scam.  But it’s a scene from Netflix’s Fyre: The Greatest Party That Never Happened that’s putting a highly-placed political operator on the defensive.

Angelo Roefaro currently serves as the press secretary for Senate Minority Leader Chuck Schumer.  Strangely, Roefaro makes an appearance in Netflix’s documentary, specifically collaborating with Fyre Festival fraudster Billy McFarland.  Even worse: McFarland was out on bail when the pair-up was filmed, and Roefaro seems to be working through some details on a laptop.

McFarland was somehow renting a high-priced hotel suite in Manhattan at the time, even after scamming hundreds of guests and workers in the Bahamas.  McFarland is now serving a six-year prison sentence for wire fraud.

Another person speaking about Angelo in the documentary says he doesn’t know if he was “Billy’s PR guy, but I know this guy was very connected.”

During that interview, Roefaro downplayed his connections with McFarland.

“We were friends. I met him at a networking event and we got along.”

Roefaro says he didn’t know anyone else in the room at the event, just McFarland.  Roefaro says McFarland invited him over to his complimentary penthouse hotel room but did not share the reason for the invitation.

“I had no idea they were filming a movie and only knew him. I was completely surprised.”

In a subsequent interview with the New York Post, Roefaro offered a more emphatic denial. When asked if he had used his PR and connections to help McFarland avoid jail time, Roefaro replied: “absolutely not.”

Publicly available information doesn’t show any connection between Roefaro and McFarland and the Fyre Festival scandal.

Roefaro began working for Schumer in 2011 as a low-level employee before being promoted to press secretary.

Roefaro reiterated to the New York Post that he was not at the penthouse featured in the documentary in any official capacity.