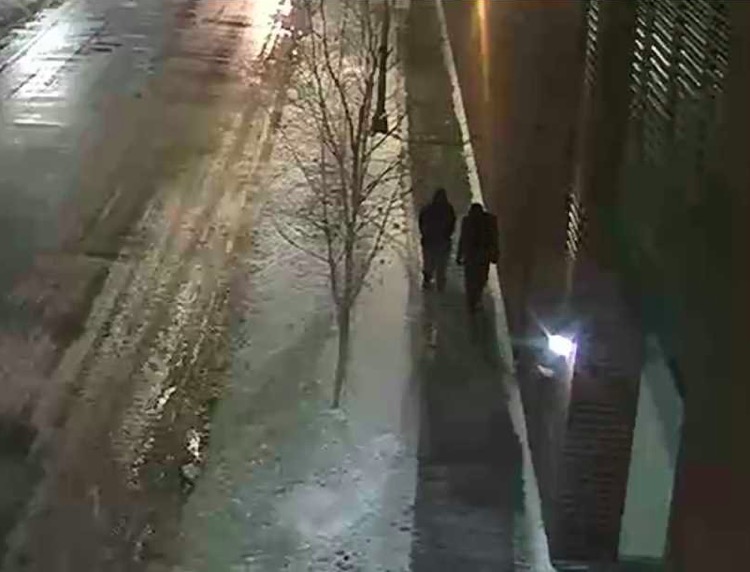 A grainy image of two persons of interest in the attack of Empire actor Jussie Smollett, released by Chicago Police on Thursday, January 31st.

An investigation into an attack on Empire star Jussie Smollett is producing few clues.

The attack was heinous and unconscionable.

Early on the morning of Tuesday on the 300 block of East North Water Street in Chicago, Empire actor Jussie Smollett was brutally attacked.  According to the actor, two individuals approached Smollett and quickly attacked, screaming ‘MAGA’ and spilling bleach on him.

The attack appeared to be a premeditated hate crime.  One attacker had a rope tied in the fashion of a noose, and tightened it around Smollett’s neck.  The actor was apparently grabbing a bite to eat at Subway, and returning to his apartment when the incident occurred.

Smollett is openly-gay, African-American, and an ardent supporter of LGBTQ rights.

“This is MAGA country!” one of the attackers purportedly screamed, referring to the Trump campaign slogan, ‘Make America Great Again’.  Before the attack, the pair also identified the Empire actor by name, and called him the n-word.

Smollett and his manager say they were on the phone while the incident occurred.

After the assault, the attackers quickly ran away, while Smollett hobbled back to his apartment building.  Approximately forty minutes later, police responded with body cameras.  The noose was loosened but still around his neck.

The crime was met with horror, and quickly sparked an investigation by Chicago PD detectives.

A number of high-profile celebrities and politicians quickly denounced the action.  In short order, a serious investigation into a hate crime was initiated.

Representative Bobby Rush, D-Ill., called for an immediate investigation by the FBI.  Donald Trump quickly described the action “horrible… it doesn’t get any worse.”

“I wish what happened to my baby was just one big bad joke but it wasn’t and we all feel his pain right now,” wrote Empire co-star Taraji P. Henson.  “@jussiesmollett is pure love to the bone.”

Meanwhile, a massive investigation was launched by the Chicago Police.

But despite the presence of multiple cameras and roughly a dozen investigators, little has been found on film.  The only image released, above, shows two dark figures lumbering down the street.

Anthony Guglielmi, Chief Communications Officer for the Chicago Police, released the image of the shadowy individuals on Twitter.  Despite the grainy and non-descript nature of the photo, it looks like the only clue so far.

“Photos of people of interest who were in area of the alleged assault & battery of Empire cast member,” Guglielmi tweeted.

According to the Chicago Tribune, footage from three different cameras were surveilled for hours.  But nothing has appeared.  “So far, police detectives have used at least three surveillance cameras to piece together what [Guglielmi] called ‘a digital puzzle,’’ tracking the movements of both Smollett and the two persons of interest,” the paper reported.

“Smollett is seen walking in one direction on a street and the two other people are walking the other way,” Guglielmi relayed.

The single published photo has sparked a wave of unanswered questions.

According to Guglielmi, the photo was snapped on New Street near Illinois Street, and taken between 1:30 a.m. and 1:45 a.m.  Smollett says he was attacked approximately 30 minutes later.

It’s difficult to tell if either individual is carrying a weapon, noose, or container of bleach.

Smollett reported that he was on the phone with his manager, who reported hearing ‘MAGA’ chants and a scuffle.  But both individuals refused to hand over their cellphones to police investigators, however.

“Both the victim and his manager have made statements to detectives that they were on the phone with each other,” Guglielmi continued. “We were not able to independently verify that because they did not turn over cell phone records to police when asked.”

Meanwhile, a raft of disconnected details and unanswered questions are starting to surface.

On social media, dozens of commenters — if not hundreds — are openly calling the account a fabrication.

Many pointed to the extremely low, sub-zero temperatures, which would instantly freeze a substance like bleach.  Others wondered how the attack was missed by multiple cameras.

Another question is why Smollett’s manager didn’t immediately call 911.

Among the critics is Erykah Badu, who appeared to openly question the account.  “Are y’all sure you know the facts before we tare shit up?” Badu tweeted.

Guglielmi says despite the missing pieces, the investigation is being taken very seriously.

“While video does not capture an encounter, detectives are taking this development seriously & wish to question individuals as more cameras are being reviewed.”

But he also noted that an expanded search has produced little more than a grainy image.

“Detectives canvassed and reviewed hundreds of hours of video and have now expanded the search area along the Chicago riverfront hoping to find a video to be able to release a public description of the offenders,” Guglielmi noted.  “Unfortunately, thus far we have not found any helpful information on a suspect or a suspect’s vehicle to be able to share.”

Meanwhile, Smollett’s family has strongly responded, and reiterated that the attack is a hate crime.

“We want to be clear, this was a racial and homophobic hate crime,” the family stated. “Jussie has told the police everything from the very beginning. His story has never changed, and we are hopeful they will find these men and bring them to justice. Our family thanks everyone for their prayers and the huge amount of love he has received.”

More as the investigation continues.  The Chicago PD has asked anyone with information to contact 312-747-8380 or tip  anonymously details to cpdtip.com.