Capcom Uploads a Massive Amount of Game Soundtracks to Spotify 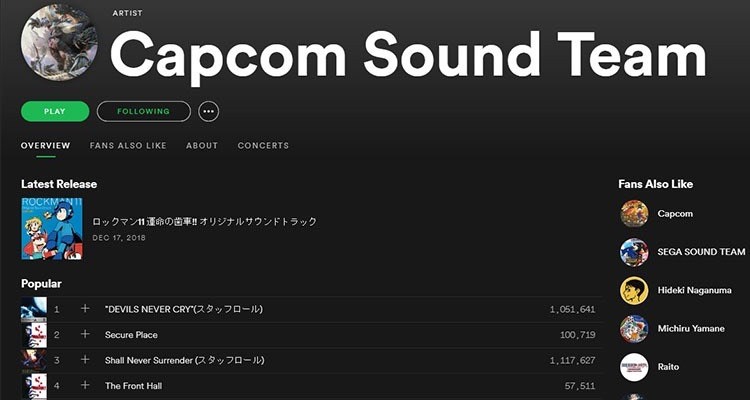 Capcom has added several dozen gaming soundtracks to Spotify, much to the delight of fans.

Fans of Devil May Cry, Mega Man, Monster Hunter, and Street Fighter can now listen to music from games in the series on Spotify. Included in this big release are remix albums and a special composed album called Monster Hunter The Jazz.

The albums and titles debuted in Japanese, but it’s pretty easy to work out the soundtrack details thanks to the album art.

With the addition of these soundtracks to Spotify, more great ambient music is becoming available on the service.  That’s become great background music for anyone looking to focus, or simply zone out on non-vocal music.

The only downside of this release is that some Capcom albums appear to be region-locked for now.  The soundtrack for Monster Hunter World is available in Japan, but not in the United States.  The same is true for the Resident Evil soundtracks and Dino Crisis, two popular game series here in the US.

Hopefully, there are no licensing issues preventing these soundtracks from being available outside of Japan in the future.  As of now, if you want to fully explore this soundtrack dump, you’ll need a VPN that supports a Japanese connection.

Game soundtracks have some of the most iconic music for a generation of listeners.

Most western games also release their soundtrack on Spotify for listening, so it’s nice to see a Japanese company hopping on board this trend.  Now, if we could just get Nintendo to follow suit with an official playlist for all of their music on Spotify.