R.E.M. Forces the Removal of a Pro-Trump Video Meme on Twitter — Including the President’s Retweet 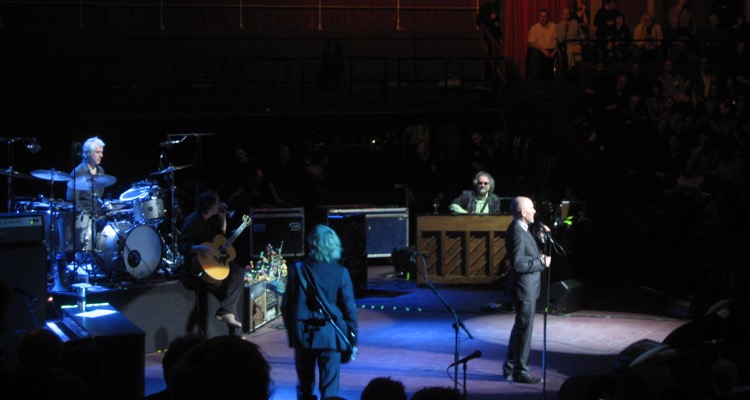 R.E.M. riled up a bunch of Trump trolls on social media this weekend.

The band took issue with its music being used in a meme video.  But unlike many other protests from prominent artists, R.E.M. (and their reps at Universal Music Group) actually got the video taken down.

The meme video featured the song ‘Everybody Hurts’ over shots of politicians seemingly embarrassed by the State of the Union address.  Alexandria Ocasio-Cortez of New York and Bernie Sanders of Vermont were two of the politicians prominently featured.

The video was so widely circulated that President Trump retweeted it, sparking outrage from members of the band.  Universal Music Publishing Group took notice of the use of the song, and demanded that Twitter remove the offending video from its service.

The video was still up on Friday evening when the official R.E.M. Twitter account weighed in on the matter.  The R.E.M. tweet called for the Congress and media to “ghost this faker!”

By Saturday morning, Twitter had removed the offending video from both the president’s timeline and the original creator’s tweet.  Attempting to access the video shows a warning that says,

“This video has been removed in response to a report from the copyright holder.”

Twitter also responded by removing the original video and any retweets of the offending tweet that included the video.  The result was a rare full-tweet removal, and suggests some serious threats coming from the offices of UMPG.

The assholes @CarpeDonktum created the meme. #PresidentAsshole retweeted it. Measures have been taken to stop it. @jack you need to get on this.

Bassist Mike Mills expressed his opinion on the video while it was up, imploring Twitter’s creator to do something about it. In subsequent tweets he bashed the president, calling him a con man and a charlatan and using the hashtag #PresidentAsshole.

@realDonaldTrump you are the World Leader Pretend. You are a fraud, a charlatan, and a con man. You know it, I know it, soon everyone will know it. You can’t be gone soon enough. #PresidentAsshole

R.E.M. is just one of several musical acts that have requested that Trump not use their music.  Rihanna, Aerosmith, The Rolling Stones, Pharrell Williams, and Elton John have all publicly requested their music to stop appearing at the president’s rallies.

But unlike an online video pairing, which constitutes a synchronization usage, plays at rallies are treated as public performances.  Unfortunately for a long list of Trump-hating artists, that subtle difference makes all the difference when it comes to legal ramifications.  And it explains why Trump can pretty much ignore any demands to stop playing music at rallies and other events.

That means unauthorized syncs constitute infringement, and potentially serious penalties for those hosting the offending content.

It’s a difference that Twitter seems to have understood well.