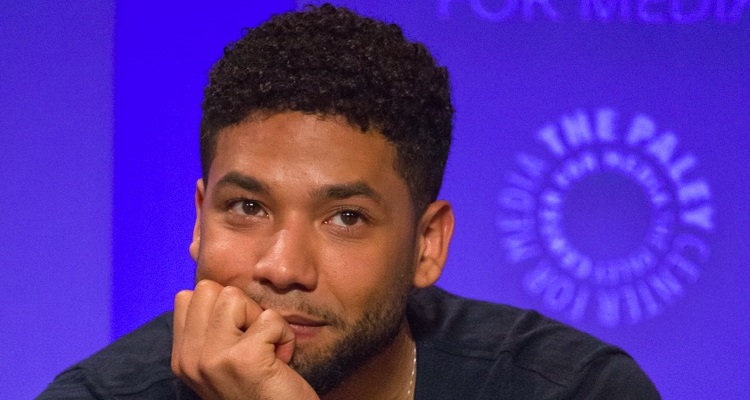 An attack that looks staged.  A hate letter that may have been self-written.  Scenes now cut from Empire.  New investigations from the Chicago Police and FBI.  Has Jussie Smollett now lost it all?

Update, Th. Feb 21st, 6:15 am PT: Jussie Smollett has now been arrested by Chicago Police.  “Jussie Smollet is under arrest and in custody of detectives,” a Police spokesperson relayed.

After a multi-week investigation, Chicago Police are now naming Empire actor Jussie Smollett as a suspect in a criminal investigation.  Initially, Smollett was being treated as a victim of a hate crime, though it now appears that he orchestrated the attack and fabricated a police report.

On the morning of January 29th, Smollett claimed that he was brutally attacked in Chicago.  The openly-gay actor said two individuals had approached him.  They screamed ‘MAGA’ while attacking Smollett and allegedly pouring bleach on him.

The attack, presumably a premeditated hate crime, went even further.  One individual tied a rope around Smollett’s neck, fashioning it as a noose. The other walked away, shouting, “This is MAGA country!”, a reference to President Donald Trump’s famous slogan.  Smollett had previously received a threatening hate letter on January 22nd, seven days before the attack.

Police found the actor forty minutes later with the noose loosened, but still hanging around his neck.

Yet, examining the details, Smollett’s story has quickly fallen apart.

On top of that, the FBI has opened an investigation into the actor’s possible fabrication of the threatening letter.  If the various stories are proven to be false, a disgraced career and jail time could result.

Initially, Chicago Police couldn’t find any suspects nor any leads.  Nearly a dozen investigators were combing through footage from more than 20 cameras in the area, with nothing substantive emerging.

Then, a pair of brothers from Nigeria – close associates of Smollett – were detained and questioned.  Based on information leaking from that questioning, it appears that the brothers staged the attack with Smollett’s guidance and payments.

To make matters worse, Smollett and his manager – allegedly talking on the phone at the time of the attack – have remained uncooperative.  Both offered heavily-redacted phone records to authorities.  Chicago Police complained the evidence was too scant to assist the investigation.

Both brothers have reportedly worked on the set of Empire, and seem highly unlikely to spearhead a racially-charged attack in the name of ‘MAGA’.

Confirming a ‘shift’ had occurred as a result of the brothers’ information, a spokesperson for the Chicago police stated,

“We can confirm that the information received from the individuals questioned by police earlier in the Empire case has in fact shifted the trajectory of the investigation.

“We’ve reached out to the Empire cast member’s attorney to request a follow-up interview.”

The FBI, with the help of the US Postal Service, has opened a serious investigation into the letter.

Federal authorities now believe Smollett may have written the letter and sent it to himself.  The letter was sent to Chicago Cinespace Studios, where Empire is filmed.  The envelope, which had ‘MAGA’ scribbled across it in bold, red letters, contained white powder.

Authorities later discovered the powder was merely aspirin.  The letter remains in the FBI Crime Lab for analysis.

The two brothers – Ola and Abel Osundairo – reportedly stated that Smollett was furious that the letter didn’t garner enough attention.

Investigators now believe the actor may have paid the Osundairo brothers to stage the attack.  Smollett’s lawyers, denying the attack was a “hoax,” stated,

“Anyone claiming otherwise is lying.”

Yet, the lawyer confirmed Smollett has “no plans” to meet with Chicago police for further questioning, seemingly underscoring his guilt.

In addition, details on Smollett’s previous legal issues have emerged.

The L.A. City Attorney’s office confirmed the actor was previously convicted and handed two years of probation.  In 2007, he had pleaded no contest to driving under the influence, driving without a license, and providing false information to law enforcement officials.

As a result of the likely hoax, Empire has reportedly edited Smollet’s scenes for episodes that have wrapped up production.

Smollett had nine scenes this season along with a “big musical number.”  Fox has reportedly now cut five of these scenes along with the musical number, according to the Wrap.  Four other scenes “have been rewritten to focus more on an ensemble” than on Smollett.

Writers have reportedly made “multiple revisions” to the second-to-last episode’s script in the last 24 hours.

“Jussie Smollett continues to be a consummate professional on set and as we have previously stated, he is not being written out of the show,” 20th Century Fox Television and Fox Entertainment stated on Wednesday.