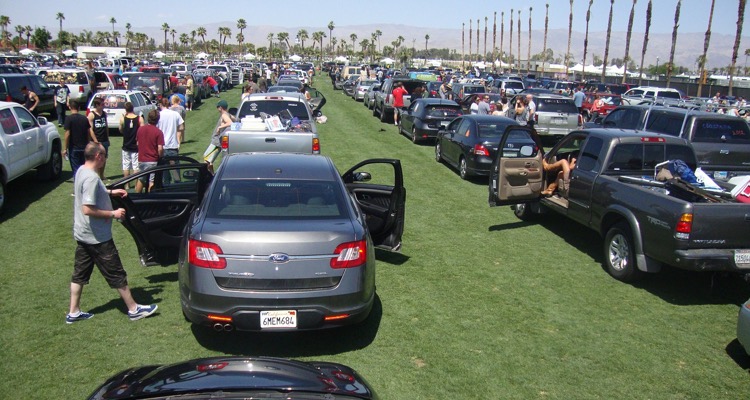 As Coachella prepares for its 20th anniversary milestone, secondary ticket prices aren’t shooting into the stratosphere.

Big thanks to DMN partner Stubhub for assisting us on this piece!

If you’ve ever attended Coachella, you probably know the ticket-buying drill.  At Coachella’s specially-appointed on-sale date, fans flood to coachella.com for first-sale tickets, hopefully for weekend one. It’s a quick pass/fail, with a lot of fails.

That process has gotten actually easier over years, thanks to some seriously-expanded capacity.  The now-standard double weekend has certainly helped, and broader capacity has steadily expanded to roughly 125,000.

But that expansion is now making it easier to grab ‘affordable’ tickets, at least in relation to the actual sticker price.  A quick check at Stubhub, for example, shows that a few weekend 2 tickets are actually below Coachella’s original list price, and have been since the on-sale date.

Weekend 1 tickets are commanding a slight premium, starting in the low-$500s. Then again, that’s not completely outrageous compared to a starting price of $429, with weekend 1 typically afforded a premium given that it’s the festival’s first run.

Of course, those prices eventually ascend, with prices slowly moving towards the VIP-level tier.  The upper-level access starts at roughly $1,000 (Coachella’s list on VIP is $999).  There’s even a near-$20,000 ticket in the stack (hey, why not).

Other add-ons, including shuttle busses, camping passes, and VIP parking passes, are also available in decent quantities.  For for those considering lodging options, camping can be a pretty good alternative to expensive hotels and remote Airbnbs.

Within hours (or minutes) of going on-sale, Coachella typically declares a sellout, and invites people to jump on the waiting list.  That’s an active option for those boxed out of the first sales window, though aftermarket options seem to offer a simpler transaction — at least right now.

Other factors could be keeping prices from skyrocketing into the stratosphere.

And outside of Coachella’s gates, plenty of rival festivals are also stacking their bills, and generating continued competition.

Actually, Ariana Grande — a last-minute addition — is weaving Coachella into a far broader tour, if you can’t catch her at the festival.  That’s typically not the case for Coachella headliners, based on the rules of the festival, though Grande got a pass after filling in for the abruptly-cancelling Kanye West.

Not heading to Coachella this year? Check out additional events!