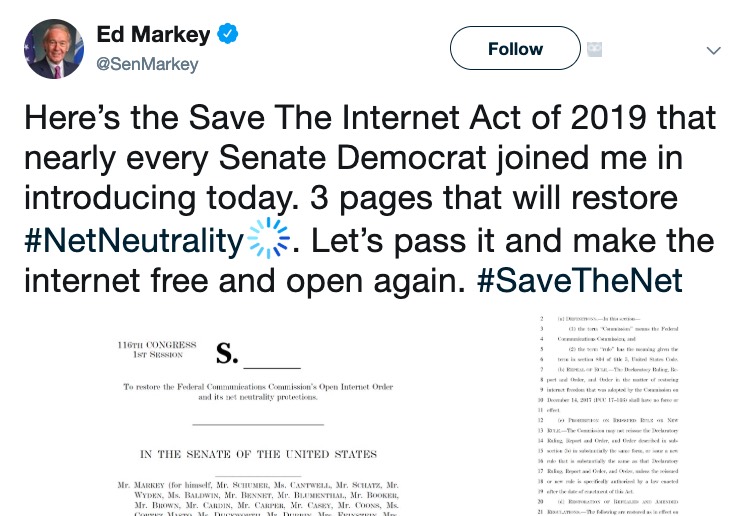 The dogfight over net neutrality in America is entering a brand-new chapter.

After contentious battles between U.S. states and the federal government, Democrats are now hoping to restore Obama-era net neutrality laws.  Led by Senator Ed Markey, D-Mass., the ‘Save the Internet Act’ would effectively undo the Federal Communications Commission’s repeal from 2017.

“It is a fight that we can win,” Markey declared during a press conference in Washington this morning. “We are on the right side of history. We will not give up.”

“This legislation brings the power of the internet to every corner of this country, from rural America and to our cities,” House Speaker Nancy Pelosi, D-Calif., added. “A free and open internet is a pillar in creating opportunities.”

But going further, the ‘Save the Internet Act’ would also prevent the FCC from re-instituting a similar provision in the future.  That’s a serious power check, and one the agency is almost certainly going to fight.

The Republican-controlled FCC voted to repeal net neutrality in December, 2017, by a 3-2 vote along party lines.  Six months later, it was officially implemented, with mega-ISPs like Verizon, Comcast, Spectrum, and AT&T applauding the regulatory teardown.

FCC chairman Ajit Pai cheered the end of ‘heavy-handed regulation from the 1930s,’ while dismissing a wave of protests as ‘hysterical’.  “[The repeal] has proven wrong the many hysterical predictions of doom, most notably the fantasy that market-based regulation would bring about ‘the end of the internet as we know it,” Pai declared.

But Markey says the repeal left smaller companies behind, with consumers also paying the price.  “Another way of saying net neutrality is saying nondiscrimination against the smallest companies, against the smallest voices within our society,” Markey said. “We are standing and fighting for them here today, and we will not stop until we win.”

The Democratic initiative follows a number of state-level laws protecting net neutrality.  Washington State was the first to pass pro-neutrality legislation, and Oregon and California subsequently passed their own laws.

The specter of a California law sparked a strong reaction from the federal government.  The U.S. Department of Justice moved to block the implementation of California’s strict new rules, while California asserted that the FCC doesn’t have jurisdiction over state-level ISP regulations.

California Senator Jerry Brown has agreed to stay the law pending the outcome of the DOJ lawsuit.