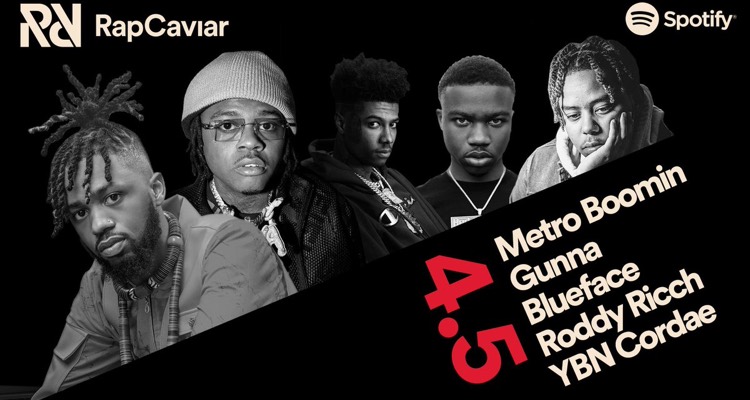 Spotify has announced a new Live Nation Urban partnership for another RapCaviar Live concert this year.

Last year, the RapCaviar Live tour featured artists like 2 Chainz, Lil Pump, Rich the Kid, Migos and more.  RapCaviar is one of Spotify’s biggest playlists, with over 11 million followers.  But how well does that popularity translate into the live concert space?

RapCaviar Live is an attempt to do exactly that.  These concert events always feature top-ranked rappers, specifically those featured prominently on Rap Caviar.

RapCaviar Live concerts kicked off in 2017 and have toured across North America. After its inception in Atlanta with Gucci Mane, the show has visited Toronto, Chicago, Charlotte, Philadelphia, Washington D.C., New York, and Houston.

Some of the artists included on those tours include Chance the Rapper, Migos, Cardi B, Lil Uzi Vert, Trippie Redd, Juice WRLD, A$AP Mob, Dipset, and Lil Pump.

The next performance will happen April 5th at Varsity Theater in Minneapolis, Minnesota.

Headliners Metro Boomin and Gunna will be followed by Blueface, Roddy Ricch, and YBN Cordae. Presale tickets will be available to Spotify Fans First starting today.

General admission tickets will go on sale through Ticketmaster.com starting on Friday, March 8 at 10 am CST.

Gunna’s headlining slot isn’t too surprising given the performance of Drip Or Drown II. The album debuted at number 3 on the Billboard 200 chart.  He’ll start his own tour at the end of the month in California, making time to fly into Minnesota for the Spotify concert.

The move is part of an ongoing attempt by Spotify to broaden beyond streaming music.  That includes high-stakes forays into areas like podcasting and audio content, not to mention broader video ambitions.

Touring is another potential offshoot, though for now, it looks like the streaming platform needs Live Nation to pull it off.

And of course: you can bet RapCaviar merch will be available for fans who attend in April.