Queensrÿche Says PledgeMusic Owes Them $70,000 — Oh, and Here’s the Number for PledgeMusic’s Attorney 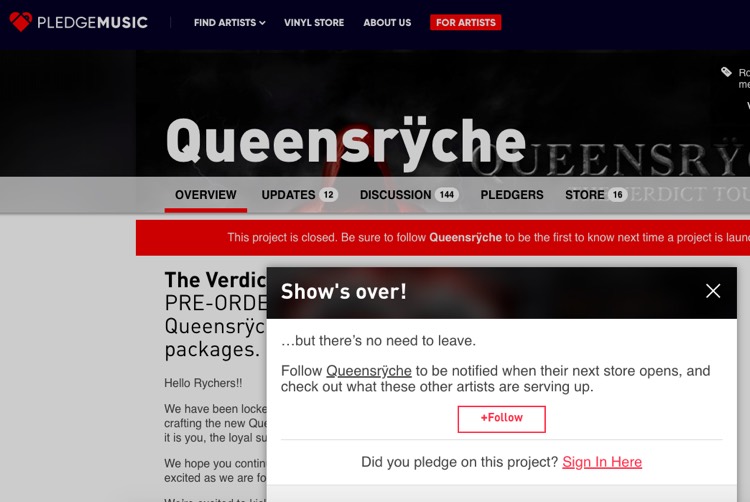 The stink surrounding PledgeMusic continues to grow.  But at least we have the number for their attorney.

How much is PledgeMusic’s meltdown costing artists and their fans?

Earlier this year, electro-industrial band ohGR claimed that PledgeMusic was withholding $100,000.  Fastball said they were owed $21,000.  And that was just the beginning.

Now, we’ve learned that Queensrÿche is owed an estimated $70,000 — with none of it paid to the band or back to fans.  The group, which first rocketed to fame in the metal-heavy 80s, is still cranking out music and touring.  They’re also connecting with die-hard fans, with PledgeMusic used as a pre-release crowdfunding vehicle for their latest album, The Verdict.

The 10-song album was released earlier this month, and listenable on platforms like Spotify.  But fans hoping to get a pre-release listen were disappointed — not to mention stiffed by PledgeMusic.

In a furious Facebook post, Queensrÿche urged fans to contest their contributions with their credit card companies, given that PledgeMusic has failed to transmit any of the funding to the band.   They also posted the number for PledgeMusic’s legal counsel, which is…

We contacted Lapowsky for comment, but predictably received no response.

Meanwhile, Queensrÿche was forced to strongly clarify that this matter was entirely out of their hands.

“We are not alone in this matter, as it has been publicly made aware that many other artists have been affected as well,” the band stated.  “We are truly sorry for this and any inconvenience this causes, but please do understand this is all out of our control – and as we said before, the Pledge folks lied and lied while they mismanaged the monies of the company.”

Separately, PledgeMusic has been silent for weeks.  Earlier, the company indicated that a solution was in the works, with a potential buyer in the wings.  Neither has materialized, raising questions over whether PledgeMusic is headed towards bankruptcy, legal proceedings, or even federal fraud charges.

None of that is a good sign, of course, and suggests that PledgeMusic could be next to receive federal fraud charges.

Just recently, original PledgeMusic founder Benji Rogers returned to the company to sort through the mess.  So far, Rogers has been unable to rectify the missing payments problem.

Meanwhile, artists like Allison Adam Tucker are being forced to cut their losses.  The indie artist found all of her contributions frozen, leaving her in heavy debt.  “So now I have to start over, but in the meantime I’m up to my eyeballs in debt,” Tucker told the San Diego Reader.

“We went to New York to record most of [the crowdfunded album], and between studio time, producer fees, and paying the musicians, I’ve got 30 grand invested in this.”

Other bands, including Failure, are trying to figure out strategies to continue releasing music while their PledgeMusic accounts remain frozen.

There seems to be some confusion about our post this morning regarding Pledge Music. Nothing that was ordered will be fulfilled. Pledge does not have the money that was pledged to them, thus there is no money for manufacturing costs and we are out $70,000.00. Pledge is no longer taking any campaign pledges for any band whatsoever and they are not responding to us. Apparently they have money problems.

HOW TO CANCEL YOUR PLEDGE ORDER:

– In the form that opens type that “I AM CANCELLING THIS PLEDGE, AND AM REQUESTING A REFUND DUE TO THE CAMPAIGN BEING CANCELLED”

– You will receive a confirmation email from them immediately.

Now PLEASE call your credit card and request a “CHARGE DISPUTE” as additional insurance for your refund.

If you are having problems with your credit card company you can contact Pledge Music lawyer Bob Lapowsky at Stevens & Lee. His email is [email protected] and his phone is 215-751-2866.

*PLEASE NOTE* THE VERDICT WILL STILL BE RELEASED ON MARCH 1ST VIA ALL OTHER OUTLETS, INCLUDING OUR LABEL CENTURY MEDIA, AMAZON, FYE, ITUNES, YOUR LOCAL RECORD SHOPS, ETC. ONLY PRE-ORDERS THROUGH PLEDGE WILL BE AFFECTED!