Apple Music Doubles Down on Data-Driven ‘For You’ Recommendations — Sound Familiar? 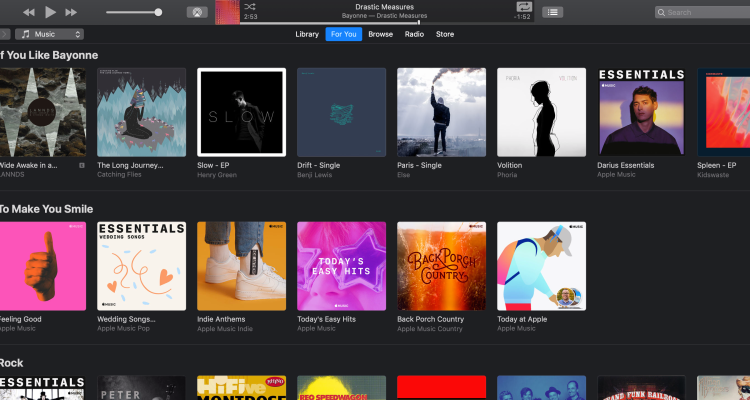 Apple Music has expanded its ‘Music For You’ personalized recommendations, despite criticizing Spotify for the same thing.

Spotify CEO Daniel Ek believes that Spotify’s computer-generated playlists are a crucial differentiator in the industry.  Up until recently, Apple has begged to differ.

Just recently, Apple CEO Tim Cook was all too happy to take a swipe at Spotify’s algorithms in an interview with Fast Company.  On the topic of algorithmic curation, Cook stated that he worried “about humanity being drained out of music.“

Now it appears Apple Music is overhauling its algorithmic-driven personalization to feature more general music themes.  These themes are personalized for each Apple Music listener, much the same as Spotify’s ‘Made For You’ playlist feature.

Music recommendations for artists, albums, playlists, and even Beats 1 episodes are organized by themes. These themes include general topics like ‘To Make You Smile’ or ‘Starting Early.’ Listeners can influence these recommendations by using the love and dislike ratings on Apple Music.

The new ‘For You’ section in Apple Music will update multiple times a day.

The idea is to create a new destination to discover music by offering recommendations based on current listening tastes. Apple Music’s new ‘For You’ themes will appear in:

While Tim Cook may focus on hand-picked playlists and human curation, Apple Music is increasingly relying on data-driven music recommendations.

That means the service isn’t so different from Spotify under the hood.

The new focus on personalization might be a concerted effort to make account sharing less appealing.  A recent report found that 1 in 3 Apple Music subscribers share their accounts with each other. Personalized recommendations might make account owners think twice about sharing passwords, lest their recommendations start being someone else’s music.