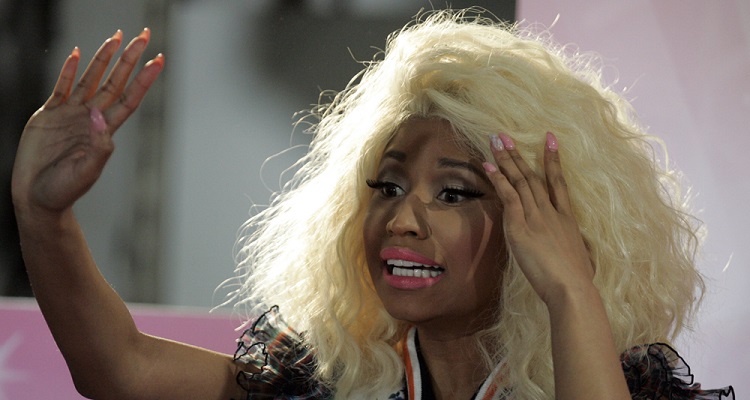 Is Nicki Minaj falling off the deep end?

Following the news that Minaj had indefinitely postponed the American leg of the NICKIHNDRXX tour, she went to war with the influential music executive.

According to Minaj, she had canceled the tour to “reevaluate elements of production.”  Minaj also wanted to contribute more time to rehearsal to make sure “her fans get the absolute best quality show they deserve.”

The real story, however, soon came to light.

The NICKIHNDRXX tour suffered from incredibly poor ticket sales.  A Live Nation source said sales “weren’t just in the toilet, they were totally down the drain.”  So, if Minaj hadn’t canceled the tour, Live Nation would’ve done it for her.

Minaj went after Azoff for allegedly ‘sharing’ the report.

On her Beats 1 Radio show, she told fans,

“The c—sucker of the day is Irving Azoff.  And I’m gonna tell you why.

“Allegedly, he tried to put out a smear campaign against my tour, and contacted people in the media to spread negative things about my tour.”

She later postponed key dates of the European leg of her tour, citing “production issues” once more.  Minaj has yet to announce the new North American dates.

Just weeks before the sudden tour ‘postponement’ – i.e., cancelation – she had accused Spotify of retaliating against her for partnering with Apple Music.

Then, two months after the tour debacle, Minaj got slapped with a copyright infringement lawsuit.

Tracy Chapman sued the artist for using an unauthorized sample of her 1988 hit, ‘Baby Can I Hold You.’  Minaj’s ‘Sorry’ featuring Nas incorporated the lyrics and vocal melody of Chapman’s work.  Chapman has sought damages and wants to prevent Minaj from “copying or otherwise using or exploiting” her works.

The female rapper had also gotten into an ugly, highly-publicized altercation with Cardi B at a New York Fashion Week event, which Minaj called both “mortifying and humiliating.”

Now, she has unexpectedly said farewell to her managers.

Can Minaj no longer handle working in a team?

Nicki Minaj has split with her longtime managers, Gee Roberson and Cortez Bryant.  She has also ended her professional relationship with Blueprint/Maverick Management.

Minaj parted ways with all parties just before her guest appearance alongside Ariana Grande at Coachella last Sunday.

The reason behind the abrupt split remains unclear.  Yet, according to insiders, all parties “amicably” agreed to stop working together.

Minaj currently doesn’t have a manager.  As of writing, she has yet to comment on the matter.