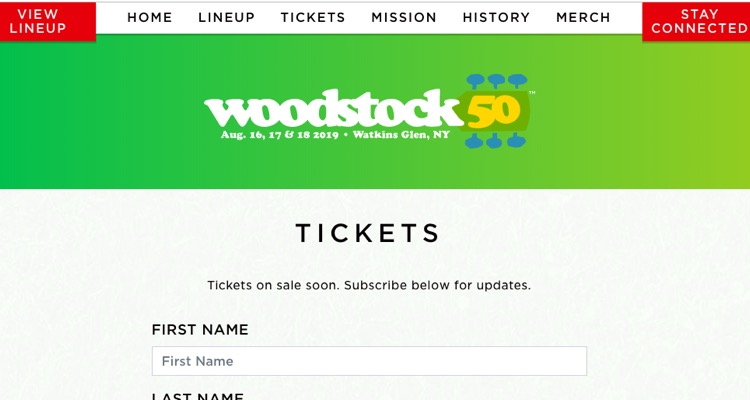 Woodstock 50’s site on May 9th. Less than 100 days out, tickets are still unavailable for purchase.

The debacle that is Woodstock 50 is descending into a full-blown legal war.

The original Woodstock was heralded as a celebration of music, peace, and loving harmony.  Fifty years later, the ill-fated Woodstock 50 has descended into an acrimonious legal war.

Ironically, the most belligerent person in this battle is Michael Lang, one of the original visionaries behind the seminal 1969 Woodstock event.  Lang is now leading a lawsuit against Dentsu Aegis, initially a lead investor behind the Woodstock 50 revival.

The complaint was officially filed with the Supreme Court of the State of New York on Wednesday, May 8th.  Among other demands, Lang has asked for a court-ordered injunction to force Dentsu to return its money and continue working on the ill-fated festival.

After pulling its remaining investment of roughly $17.8 million following serious capacity and permitting issues, Lang is accusing Dentsu of illegally sabotaging the event.

Dentsu was coordinating its investment through its production arm, Amplifi Live.  Both entities are now completely out of the event, based on serious concerns that a disastrous failure was ahead.

But that pullout was ‘illegal,’ according to the filing, and part of an effort to destroy the event.  “[Dentsu] secretly decided to abandon, and then sabotage the Festival to ensure that it would never happen,” the filing claims. “They pillaged the Festival bank account on its way out, taking all of the $17.8 million in the account earmarked for Festival production costs.”

“This is the equivalent of one spouse raiding a marital bank account and changing the locks in the middle of the night to lock out the other spouse and starve them of money to live,” the claim continues.

Beyond that, the court filing claims that Dentsu surreptitiously contacted marquee performers like Jay-Z, Janelle Monae, and Imagine Dragons, and encouraged them to back out of the event.  Already, Woodstock 50 has paid performers more than $32 million in upfront guarantees, all amounts that can’t be refunded.

But apparently, Dentsu has promised some of the performers juicy slots at the upcoming 2020 Olympics in Tokyo, which Dentsu is helping to coordinate.  More importantly, they’ve also promised to indemnify performers from any legal actions if they backed out.

The same goes for festival vendors and partners, a list that may include Superfly, which has now backed out of the deal.

The filing notes that Dentsu has been “contacting numerous stakeholders — including musical talent and their agents, insurers and public officials — falsely telling them that they were released from their contracts with W50 and the Festival, and that the performers should not perform at the Festival, though they have all been paid in full.”

Sadly, this lawsuit seems more about Lang’s ego than actually saving the event.  In the event that Dentsu if forced to re-join the Woodstock effort, it’s highly unlikely that a winning festival will result.  Like the sparring couple alluded to in the court filing, Dentsu is now extremely adversarial to Lang, and Superfly has also pulled out.

A forced marriage, coupled with an already-disastrous planning process, doesn’t sound like a winning romance.