Are ‘Microbe-Grown Headphones’ the Future of Sustainable Audio Technology? 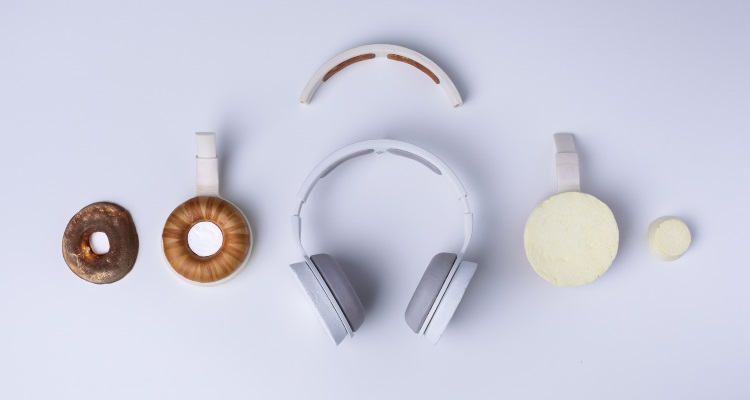 These Korvaa headphones were grown using fungus and a yeast-based bioplastic grown by microbes.  But how do they sound?

The answer is that these aren’t working headphones, just prototypes for a future, sustainable pair.  But biodegradable, landfill-free electronics sound like a good idea for the future.

Finnish studio Aivan worked in collaboration with scientists to create the microbially grown headphones. There are six different substances at play here, and they were designed to showcase the potential of synthetic biology to create a sustainable future.

The idea is to move away from the culture of planned obsolescence in electronics, where old is disposed for new on a regular schedule.  Finnish design house Aivan said nature produces some of the most durable and most versatile substances known to man.  So they set out to figure out how to harness that power.

The result is the Korvaa headphone, fashioned from fungus, bioplastics, and other natural materials.

Aivan wanted to replace everything they could with a naturally-derived material. The main structure of the headphones is 3D-printed using a bioplastic that is a byproduct of yeast processing lactic acid. The polylactic acid polymer is durable and flexible enough to form the body.

Padded earpieces were created from a protein called hydrophobin that is made up of many tiny bubbles, resembling artificial foam. The earbuds are covered in mycelium, which is a fungus-derived material for flexibility to cover the ear cuffs. The mesh on the Korvaa headphones is created by spinning out synthetic spider silk.

As mentioned, the Korvaa headphone is a non-working prototype right now. Aivan says the idea was to show that electronics don’t need to be made from non-biodegradable materials. Thomas Tallqvist spoke about the project and what it means for synthetic biology going forward.

“This was certainly only a surface scratch into where biology-engineered materials are going, and what we can do with them in the future.”

The headphones will be on display at several design shows in Finland.