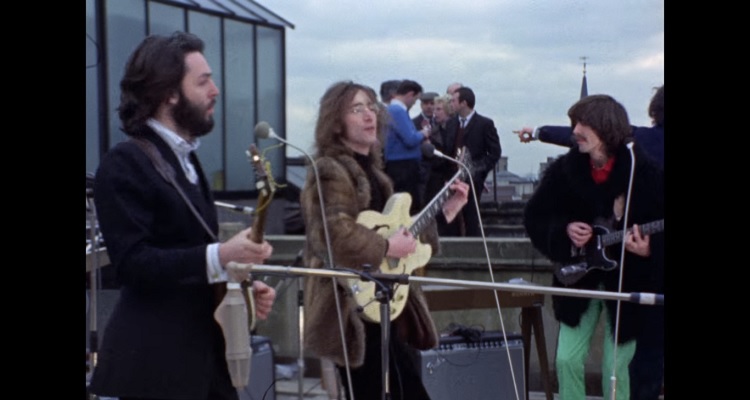 The rare Beatles footage was sitting in an attic for decades.

It didn’t take long for The Beatles to rise to prominence. The world-renowned quartet came to be in 1960, and by 1963, their tremendous sound, fun off-stage antics, and inviting personalities captured the ears—and hearts—of fans all around the globe.

Of course, The Beatles’ music remains popular today, almost 60 years later, and each of the band’s members went on to enjoy successful solo careers. Paul McCartney and Ringo Starr are still rocking out now!

Before these solo careers took off, though, The Beatles endured a break-up that was crushing to fans. After years of continuous practicing, recording, and touring, relationships among the bandmates had grown, in a word, troubled.  Stated in short, John, Paul, George, and Ringo knew it was time to go their separate ways.

Prior to their doing so, however, The Beatles engaged in an impromptu rooftop performance in London. The date was January 30, 1969, and the 42-minute show was tremendous. It was also something of a sendoff for The Beatles—a chance to end things on a positive note and remind one another and fans that while talking and getting along were proving difficult, the music came just as easily as it always had.

Beatles fans treasured the performance for several key reasons, the most significant of which was that the band hadn’t played in public since 1966, at which point they dedicated themselves to recording in the studio.

Now, thanks to the discovery one man recently made in his attic, fans can more easily bridge the gap between The Beatles’ touring and studio years.

David Chandler, a dedicated Beatlemaniac, used a wind-up camera to capture the band’s 1966 performance on “Top of the Pops.” The BBC’s video of the performance was destroyed, a result that wasn’t isolated for British and American media organizations of the era.  The clip had been sitting in Chandler’s attic, untouched, for more than 50 years.

Now, with full footage of the performance available, sound technicians have been able to sync audio and edit the work for clarity.

According to a statement issued on the find, the full clip was widely believed to have been destroyed prior to the discovery.  Actually, a sparse, 11-second clip of the performance had already been recovered and preserved.

Of course, the full, 92-second recording of the track ‘Paperback Writer’ was viewed as a miraculous discovery, with the entire remaining of the “Top of the Pops” program also preserved.

The full performance was shared with video preservation experts Kaleidoscope, who helped to restore this relic of history.  “Kaleidoscope thought finding 11 seconds of ‘Paperback Writer’ was incredible, but to then be donated 92 seconds – and nine minutes of other 1966 Top of the Pops footage – was phenomenal,” Kaleidoscope’s chief executive, Chris Perry, stated.

Just like that, an invaluable moment of musical history has been rediscovered. The moral of the story is encouraging: if footage of a band as popular as The Beatles can be found after decades, there’s still hope of coming across other entertainment treasures.