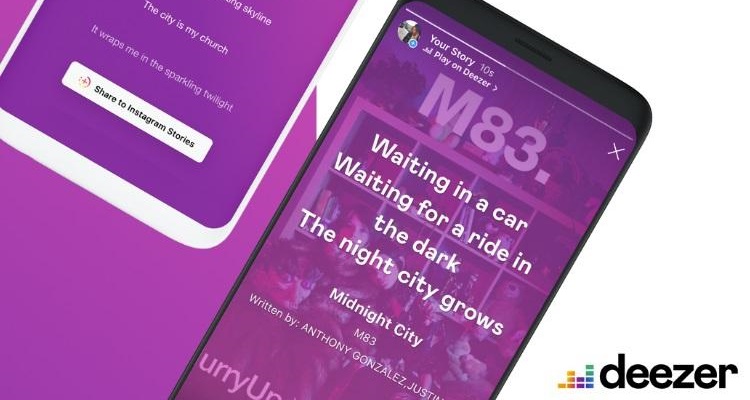 Despite being embroiled in a lyric plagiarism accusation, LyricFind will power Deezer’s Instagram Stories integration.

Earlier this month, lyrics copied straight from Genius were proven to be showing up in Google’s search results.  Genius says Google has been siphoning the lyrics and driving clicks and revenue away from its site. Google says it sources all lyrics not provided by studios from LyricFind, another site authorized to host song lyrics.

LyricFind was caught ‘red-handed’ copying and pasting its lyrics through a clever technique using apostrophes and Morse Code. Using a clever system of alternating apostrophes, Genius proved that its lyrics were indeed being plagiarized.

When presented with the evidence, LyricFind released a statement admitting some lyrics ‘might’ be copied.

LyricFind’s defense is that a little stealing is okay, as long as you’re not stealing everything you publish. Now, the company will power Deezer’s lyrics integration into Instagram Stories.

Users will be able to tap the lyrics symbol in the mobile app to view lyrics and share them. You’ll be able to crop up to five lines from a song before heading into Instagram’s ‘Story Mode’ before posting. Users can share covers of tracks, artists, playlists, albums, and podcasts to their Instagram Stories.

Deezer first partnered with LyricFind in 2014 (before Google in 2016) to provide lyrics for its catalog of music. Deezer app users can touch a button to pick between “sing-a-long” and “score mode.” Sing-a-long mode offers a synchronized view of the words as the music streams. Score mode displays the entire set of lyrics for viewing at once.

LyricFind doesn’t expect any legal ramifications ahead, and apparently neither does Deezer. The reason is that Genius, while proving the theft, may have scant legal recourse given the nature of lyrics IP.  Ethically, of course, the story’s a little different.

LyricFind’s CEO Darryl Ballantyne said of his team of transcribers: “[they] have been capturing and time-stamping lyrics literally for years” in that announcement. With the recent accusations and absolute proof of copy and pasting, seems like those transcribers may have gotten a little lazy between now and then.