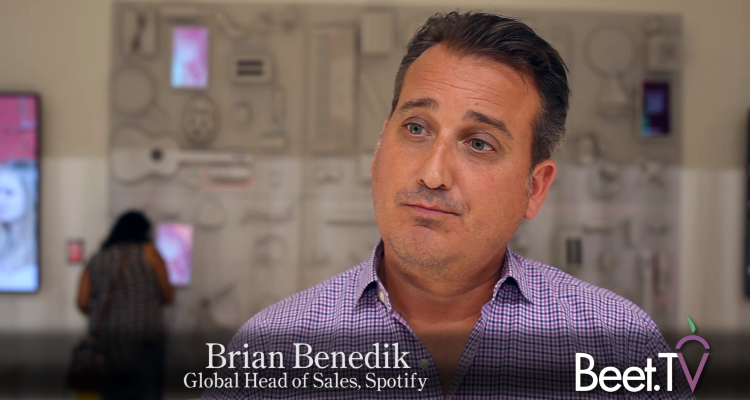 Spotify’s Global Head of Sales — Brian Benedik — will be departing the company later this fall.

At present, Spotify doesn’t have a clear replacement but is actively seeking to fill the role.  News of the departure leaked earlier this week, and is now all-but-official.

Spotify has been experiencing a significant turnover of top executives since the company went public this year.  Even before Spotify’s NYSE listing, several high profile executives left the company.  Some were probably cashing in on a decade-long investment, while others were lured away by competitors offering better salaries.

Benedik joined Spotify in 2013 as the VP of North American sales. He was soon promoted to his global role in 2015. Benedik helped create Spotify’s third-party measurement services in cooperation with companies like Nielsen.

Benedik’s tenure as Global Head of Sales coincided with healthy revenue growth for Spotify. The company saw a 24% year-over-year growth during the first quarter of his tenure.  Programmatic ad sales saw a boost of 53% during the same time period.

Spotify has over 100 million paid subscribers, but the company is struggling to be profitable. One area where Spotify is seeking to set itself apart is the focus on podcasts and original episodic content for subscribers. The streaming company bet big on podcasts this year, with hundreds of millions pouring into the expansion.

In 2019 alone, Spotify has purchased three podcasting companies including Gimlet Media, Anchor, and Parcast.  Accordingly, Benedik spent much of the Consumer Electronics Show in Las Vegas this year promoting Spotify’s focus on podcasts. He showed off the company’s roster of new, exclusive content, including an exclusive podcast with former President and First Lady, Barack & Michelle Obama.