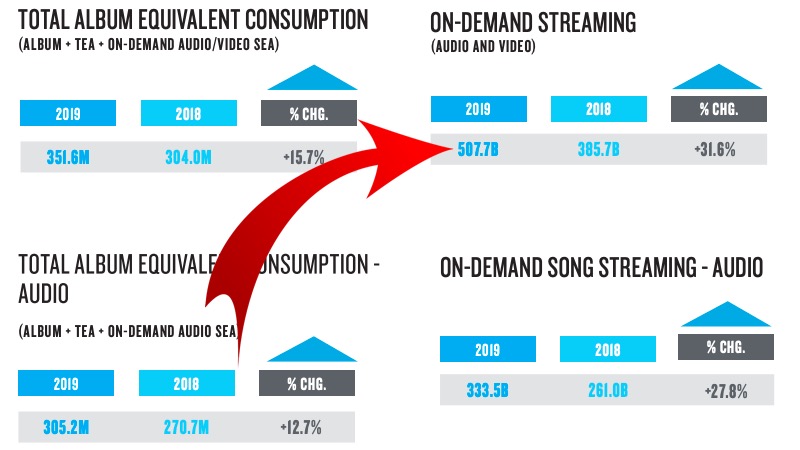 Nielsen has unveiled its 2019 Music Mid-Year report for the United States.

Physical and digital downloads, however, continue to drop substantially.

In good news for record lovers, vinyl LP sales rose 9.6% to 7.7 million.  That’s a figure that’s likely to get a substantial bump in the second-half, thanks to a monstrous pre-sale by Garth Brooks.

For the tracking period of January 4th to June 20th, 2019, Ariana Grande’s Thank U, Next ranked as the most popular album.  Her single, ‘7 Rings,’ ranks as this year’s most-consumed song with 777 million on-demand streams.

An unprecedented crossover into film & tv is also boosting music streams and sales.

Also, following the airing of Netflix’s The Dirt biopic of the group, Motley Crue’s catalog consumption skyrocketed 683%.  The dueling Fyre Festival documentaries on Hulu and Netflix allowed Ja Rule to experience a minor 33% consumption of his catalog.

Featured image by Yan Pei-Ming and Yann Caradec (CC by 2.0).