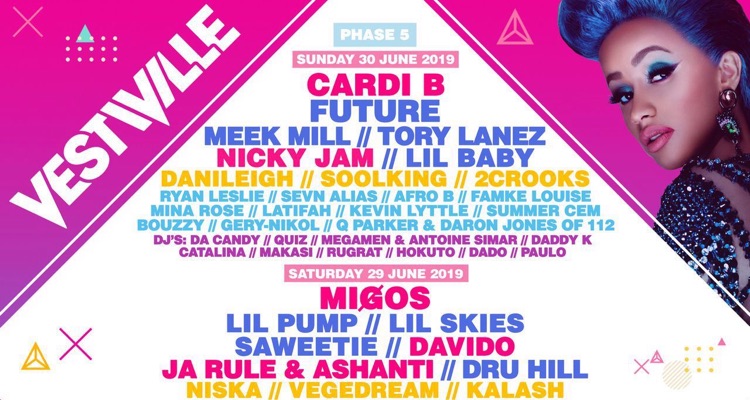 Two organizers of the VestiVille festival are still in Belgian jail after the festival’s last-minute cancellation.

Comparisons are already being drawn to the Fyre Festival debacle.

Promoters of VestiVille advertised that huge names like Cardi B, ASAP Rocky, Migos, and Future would perform at the festival. It was promoted as the new place to experience hip-hop and urban music in Europe.

VestiVille was slated to be held in Lommel from June 28th to June 30th, but local authorities quickly shut down the event.

The festival announced on Friday that the event would not go ahead as planned, thanks to an order by local authorities. Soon thereafter, security officers for ASAP Rocky’s security team could not agree on the safety of the artist and backed out.  ASAP later tweeted that he wouldn’t be performing at the event “due to security and infrastructure concerns.”

“The promoters told me it would be handled, but, unfortunately for you and me, they didn’t,” Rocky tweeted.

Fans who arrived from abroad to attend the festival reported seeing an unfinished, under-staffed site.  Lommel mayor Bob Nijs said he deeply regretted having to cancel the festival, but the decision came down to safety concerns.

Nijs says the facility lacked emergency exits, had no functioning medical stations, and the stage was unfinished. Videos on social media show fans upset at police, telling them to leave the site.

Scenes at @VestiVille were beyond scary. Unprofessional and so unsafe. No announcement regarding cancellation and staff members put at risk. Ridiculous pic.twitter.com/IitjUjvFze

Fans who purchased tickets to the event through Festicket and Eventbrite will be refunded. Eventbrite has confirmed it will refund all tickets for the festival.

A Limburg public prosecutor is investigating the Cambodian-born siblings for misrepresenting the festival’s financial situation.

One festival promoter says the brothers widely claimed that the event was sold out, which was far from the truth.  Mocked-up screenshots were used to inflate the company’s earnings and reassure its creditors.  According to one festival worker, VestiVille’s sole financial backer was “a rich man from Asia.”