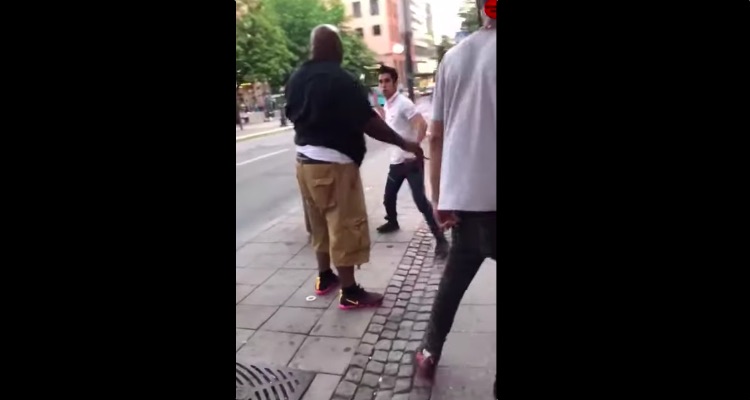 Footage showing an altercation between A$AP Rocky’s bodyguard and a Swedish resident.

President Trump has dispatched a special envoy for hostage affairs to Stockholm to demonstrate support for—and to assist—rapper A$AP Rocky, who is facing assault charges in Sweden.

A$AP Rocky, whose real name is Rakim Mayers, has been jailed in Sweden since the beginning of July, when he and his crew were involved in an altercation with multiple Swedish nationals. Despite receiving widespread support from fans, fellow musicians, and President Trump, Rocky remained incarcerated ahead of the trial.

Sweden doesn’t have a cash-based bail system, and the presiding judge ruled Rocky to be a flight risk.

In addition to dispatching this special envoy, President Trump spoke with Swedish Prime Minister Stefan Lofven about A$AP Rocky and, in tweets, questioned Swedish authorities for jailing A$AP Rocky and his entourage. Prime Minister Lofven has said that he cannot interfere with an ongoing court case.

The videos posted by A$AP Rocky following the confrontation cast him, his friends, and his bodyguard in a positive light. Rocky could be seen telling the alleged victim that he didn’t wish to fight him and/or end up in jail; the victim was shown breaking a pair of headphones over Rocky’s bodyguard’s head.

However, now that the court case is underway, it seems that there may have been slightly more to the story than was initially let on.

Previously unseen footage of the incident was played by prosecutors, and potentially incriminating text messages exchanged between Rocky and his crew were also submitted to the court.

That said, it’s important to emphasize that A$AP Rocky and his lawyer are still arguing that the episode resulted from self-defense. A$AP Rocky’s mother, who was on hand in Stockholm to watch the case, revealed that she also believes her son to be innocent.

If found guilty, Rocky could face two years in prison. Although a verdict hasn’t yet been returned, prosecutors have indicated that even if Rocky is at fault, he probably won’t receive the maximum sentence.

The case should wrap up soon, and we’ll continue posting updates until the court’s decision has been finalized.