Throwing in the Towel — Woodstock 50 Is Officially Canceled 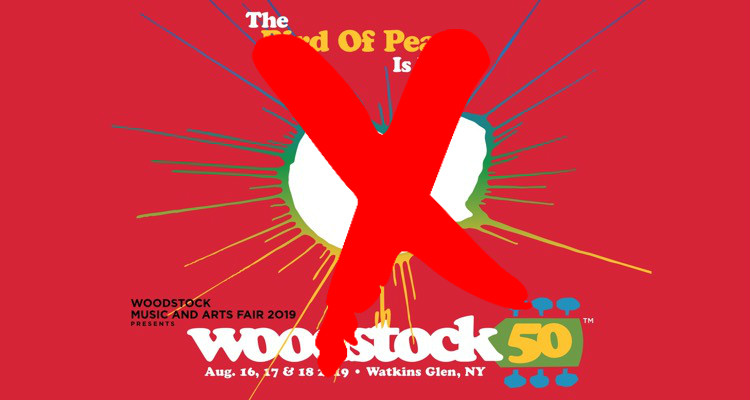 “Woodstock 50 today announced that the three-day Festival to celebrate its 50th Anniversary has been canceled.”

Instead of accepting blame for the cancelation, Michael Lang instead explained “a series of unforeseen setbacks” had made it impossible to hold the event.

“When we lost the Glen and then Vernon Downs, we looked for a way to do some good rather than just cancel.”

News of the event’s official cancelation comes hours after even more artists officially pulled out of Woodstock 50.  Headliners Miley Cyrus joined the Raconteurs, the Lumineers and original Woodstock 1969 performers Santana, John Sebastian, and Country Joe McDonald in stating they would not appear at the event.  The pullouts reportedly sparked Lang and Peck’s plan of ‘guilting’ artists into appearing.

Each headliner, including Jay-Z and John Fogerty, had already received millions in upfront payments for their now-canceled performances.

Speaking about the payments, Lang continued in his letter,

“We formed a collaboration with HeadCount to do a smaller event at the Merriweather Pavilion to raise funds for them to get out the vote and for certain NGOs involved in fighting climate change.  We released all the talent so any involvement on their part would be voluntary.”

He added “conflicting radius issues in the DC area” led to many artists’ last-minute cancelations.  Others merely passed “for their own reasons.”  Behind the scenes, organizers also trimmed the three-day event to a single day.

Confirming reports artists received sizeable upfront payments, Lang publicly encouraged musicians and their agents to donate “10% of their fees” to charity.  This would contribute to Woodstock 50’s “spirit of peace.”

“We thank the artists, fans, and partners who stood by us even in the face of adversity.  My thoughts turn to Bethel and its celebration of our 50th Anniversary to reinforce the values of compassion, human dignity, and the beauty of our differences embraced by Woodstock.”

“The unfortunate dispute with our financial partner and the resulting legal proceedings set us off course at a critical juncture, throwing a wrench in our plans and forcing us to find an alternate venue to Watkins Glen.”

Peck, however, refused to explain why Dentsu Aegis pulled out.  Behind the scenes, Lang, Peck, and their team promised the Japanese concert promoter that over 125,000 attendees would attend.  They silently revised that number to 75,000, thus violating their agreement with Dentsu.  In addition, Lang and Peck also failed to file mass-gathering permit applications in time and left out critical application requirements.  Event producer Superfly also soon pulled out.

As with Lang, Peck also refused to accept the blame for the event.  Painting himself as the victim, he added,

“The timing meant we had few choices where our artists would be able to perform.  We worked hard to find a way to produce a proper tribute—and some great artists came aboard over the last week to support Woodstock 50 — but time simply ran short.”

I.M.P.’s Seth Hurwitz, who operates the Merriweather Post Pavilion and invited Lang to hold the event there, hinted that organizers may eventually plan another Woodstock-style revival.

“While we were able to quickly eliminate the venue portion of the challenge to present Woodstock, it was just too late in the game.  Hopefully, with plenty of time to prepare, Merriweather will become the site of a future festival that captures the original vibe.  A lot of people clearly wanted it to happen.”

As I’ve previously explained multiple times, Woodstock 50 was doomed from the very beginning.