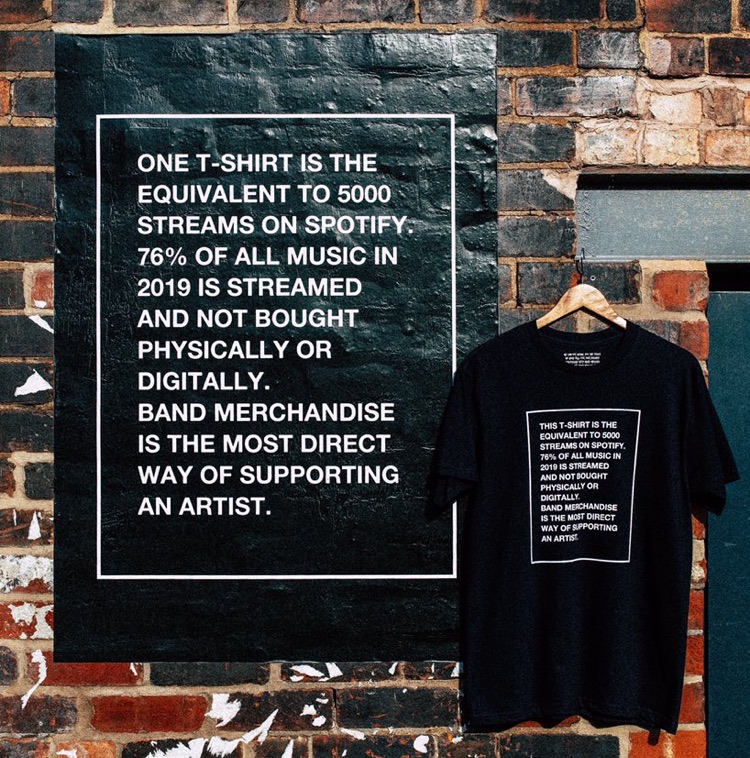 While She Sleeps has taken an unexpected step to bring attention to paltry Spotify royalties.

While She Sleeps, a British metalcore band, has released a t-shirt that’s meant to spread awareness of their lackluster Spotify royalties — and, more broadly, the financial difficulties faced by today’s musicians and bands.

The shirt’s design consists solely of text, which as you can see above, reads,

“One t-shirt is the equivalent to 5000 streams on Spotify. 76% of all music in 2019 is streamed and not bought physically or digitally. Band merchandise is the most direct way of supporting an artist.”

The t-shirt’s design was posted on While She Sleeps’ Twitter page.

An open letter, written by the band’s members, accompanied the design.  The letter indicated, amongst other things, that the t-shirt’s image can be used for free by other musicians who’re looking to bring about positive changes to the way streaming royalties are calculated and dispersed.

The letter also highlighted the difficulties that artists encounter when attempting to get by on unpredictable tour earnings, lackluster merchandise sales, and meager streaming royalties.

While She Sleeps isn’t the only member of the music community to take issue with Spotify’s royalty payments.

Earlier this week, Slipknot frontman Corey Taylor published a string of tweets that made clear his immense dissatisfaction with the state of the music streaming industry.  “We HAVE to tour,” Taylor wrote.  “It’s the only way we can make a living.  Merch helps, but the merch companies make the lion’s share.”

“Streaming is pricing artists — old AND new — out of careers.”

The t-shirt can be purchased through While She Sleeps’ official website.

High-profile artists have been voicing their support for fundamental changes to the music streaming landscape for years.  But little has changed, especially at Spotify.  Despite endless protests and horrifyingly-low streaming payouts, Spotify CEO Daniel Ek has repeatedly pointed blame at major recording labels, while stating that Spotify has paid billions in royalties since its inception.

Over time, Ek noted that artist protests against streaming royalties have ‘started to die down,’ though it’s unclear if that’s simply the result of a numbed and defeated group of artists.

Separately, Apple has been supportive of broader royalty increases for publishers and songwriters, while Spotify, Alphabet/Google, Amazon, and Sirius/Pandora have protested proposed increases.

While She Sleeps is currently touring to support their latest album, So What?, which was released in March.

The band has performance dates arranged well into next year, and fans in America, France, Greece, Germany, Australia, and multiple other locations can buy tickets to watch them perform live.

In addition to being an awesome way to have fun and enjoy live music, buying concert tickets is also a means of supporting musicians.  Though this support isn’t a long-term solution to artists’ woes, it certainly won’t hurt their ability to make a living.