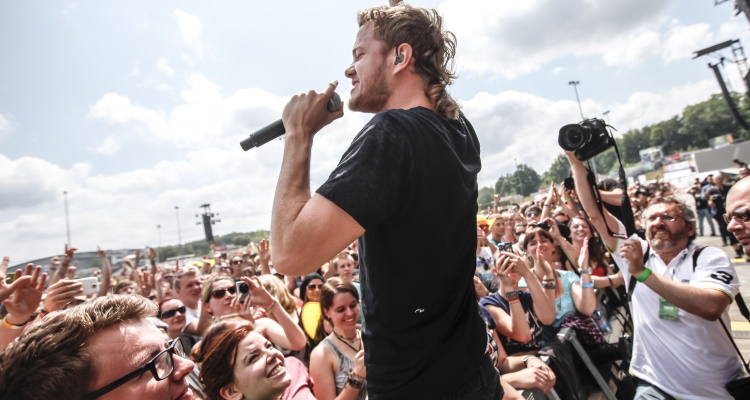 In the tweet, Reynolds even referenced the failure of Woodstock 50 to materialize.  The event, which sought to commemorate the peaceful gathering of the original Woodstock, suffered from constant in-fighting and numerous venue changes before its cancellation.

“With the failure of WOODSTOCK I pose this question,” Reynolds posted.  “What artists/speakers are willing to play for free (we get some corporate dollars to cover crew costs and travel etc) to put on a festival raising money for organizations that are fighting for new legislation regarding gun laws.” 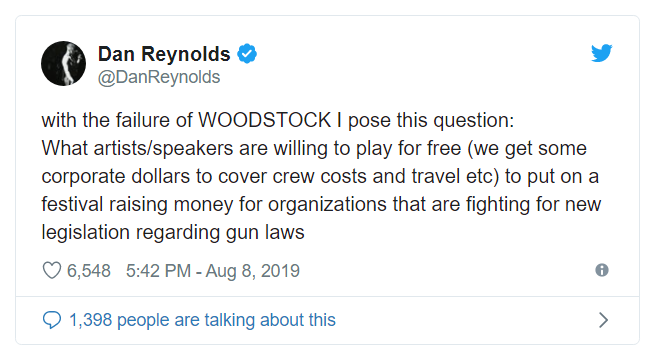 Reynolds received an outpouring of support, along with a heavy dose of skepticism and pushback.  Many accused the singer of being political, though Reynolds attempted to clarify himself when those accusations were made.

“We are gonna DO this I promise you that,” Reynolds answered back. “This isn’t political. This is a festival about our people being KILLED. It needs to stop. And honestly. It’s gonna take our artists and people of influence stepping up. Because lawmakers ARE NOT.”

Several high-profile artists have already stepped up to answer the call on Twitter.

The Head and The Heart, Zedd, Super Whatevr, Alli Fitz, Garrison Starr, and I Don’t Know How But They Found Me have all committed.

Dan Reynolds has long been an activist for LGBTQ rights, though this obviously expands that activism into a new direction. Primarily, the proposed festival would support organizations fighting for better gun control laws in the United States.
The festival comes as Americans continue to absorb the extremely violent mass-shootings of El Paso and Dayton. Even worse is the racist and divisive rhetoric that is fueling the surge in violence. In the El Paso situation, the shooter has admitted he was targeting ‘Mexicans.’ The shooter referred to a manifesto that he posted online, one that declared the presence of a “Hispanic invasion of Texas.”

Hours after that attack, a gunman in Dayton, Ohio killed nine people in thirty seconds. Police officers on the scene shot and killed the gunman.  The FBI is looking at both cases as potential domestic terrorism committed by men who subscribe to violent ideologies.

The El Paso gunman has been in jail since surrendering himself and has been cooperative with authorities.