Despite Reaching 1.3 Billion Views on YouTube, Gotye Refuses to Place Ads on ‘Somebody That I Used to Know’ 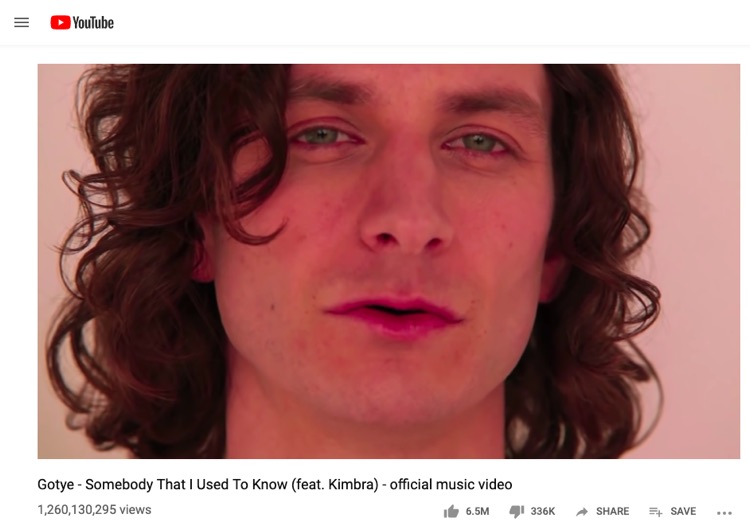 Gotye hasn’t made a dime on YouTube royalties. Here’s why.

Gotye’s best-known song, “Somebody That I Used to Know,” has enjoyed massive worldwide success. Based upon the song’s smashing international success and 1.3 billion YouTube views, many have assumed that Gotye’s has made a killing on ad revenue. But that’s simply not the case.

On the contrary, Gotye, whose real name is Wouter De Backer, hasn’t monetized the YouTube video for “Somebody That I Used to Know.” The 1.3 billion views it’s garnered haven’t produced any ad revenue whatsoever.

Moreover, none of Gotye’s videos feature ads. It’s difficult to predict how much he’d have made with ads, as YouTube provides its top creators with special royalty rates, but it can be stated with confidence that the sum would have been tremendous. Korea’s Psy, for instance, has made many millions of dollars from YouTube adverts.

When asked about his decision to not monetize his songs’ YouTube videos, Gotye said, in more words, that he didn’t want to take away from his music’s artistic appeal by selling it to consumers.

“I’m not interested in selling my music,” de Backer told News Limited. “That’s the reason I don’t put ads on my You Tube channel, which seems strange to people in today’s climate, but that is a decision you can make. I’m like that with all my music. Ads are calling for our attention anywhere we turn in the world. If you can do something you care about and other people maybe care about and keep it out of that world that feels like it’s all about ‘hey buy this stuff’ then that’s a good thing.”

Talk about a man that’s committed to his craft.

However, that’s not to say that the 39-year-old Aussie hasn’t made money during his long career. His net worth has been estimated at $10 million (at least according to one source), and it’s likely that the figure will continue to grow — partly on the strength of his now-classic hit. Beyond that, there are plenty of other revenue sources that don’t directly involve ads, including live performances, Spotify streams, and physical sales (to name a few).

Gotye hasn’t released any new music in recent years, but he’s stayed busy. In 2014, he launched Spirit Level, an independent record label, which he oversees today. He’s toured, performed, and collaborated with many artists, including Jean-Jacques Perrey, and in 2018, Gotye’s daughter was born.

It’s also worth noting that Gotye is reportedly working on a new studio album, but he hasn’t publicly commented on the subject— let alone provided a potential release date.