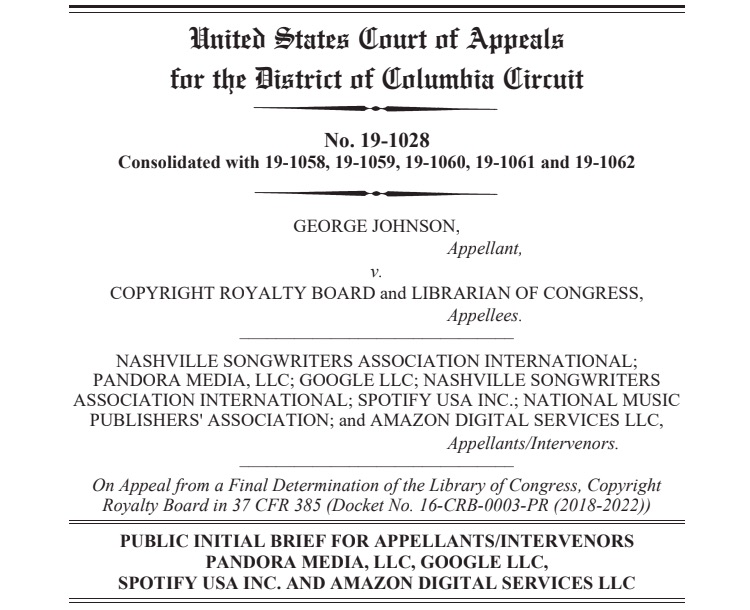 Back in March, the streaming music giants first announced their intentions of fighting a major increase in streaming royalty rates for publishers and songwriters. The sizable 44% increase, which applies to streaming mechanical rates in the U.S., was handed down by the Copyright Royalty Board before drawing the sharp rebuke of streaming platforms.

That, in the words of National Music Publishers’ Association (NMPA) president David Israelite, was effectively ‘declaring war’ against songwriters.  “The CRB’s final determination gave songwriters only their second meaningful rate increase in 110 years,” Israelite stated. “Instead of accepting the CRB’s decision which still values songs less than their fair market value, Spotify and Amazon have declared war on the songwriting community by appealing that decision.”

Israelite’s tough talk hasn’t swayed the major streaming services, however.  On Wednesday, the group formally entered a 92-page appeal of the rate increase and shared the filing with Digital Music News (the full document is here).

These are some seriously large companies, and Google and its Alphabet parent count for at least two services, Google Play Music and YouTube.  ‘Amazon Digital Services ‘ includes both Amazon Music Unlimited and Amazon Prime Music, as well as variations (for example, a stripped-down, ad-supported service for Alexa users that is currently rolling out).  Pandora is now owned by Sirius XM Radio, which is no stranger to exchanging barbs with major publishers and the NMPA’s Israelite.

Those groups are all part of the Digital Media Association, or DiMA, which also counts Apple amongst its ranks.  It should be noted, however, that Apple isn’t appealing the decision and views the increases as a healthy change for songwriter and publisher royalty structures.

Immediately after the filing, DiMA CEO Garrett Levin seemed to imply* that royalty rates should be kept at a reasonably low and affordable rate to preserve the growth rate of streaming.

“Streaming has reinvigorated the music industry and represents both the present and future of how fans engage with music whenever and wherever they want and how creators reach old fans and make new ones,” Levin emailed Digital Music News.

“All stakeholders should work to preserve and support the continued, unsurpassed growth that streaming has brought to the industry, and the innovations that have made it possible.”

That statement suggests that paying songwriters and publishers more would stunt the currently-surging growth of platforms like Spotify, which now boasts roughly 110 million paying subscribers. But the filing itself attacks the royalty rate increases on more fundamental legal and logical levels, arguing that the increases are “arbitrary and capricious, unexplained, and unsupported by substantial evidence.”

*Updated, 8/15 3:30 pm PT: DiMA took issue with the earlier version of our article, which made it appear that Levin had stated that lower rates would help to preserve streaming’s aggressive growth rates.  Rather, DMN interpreted Levin’s actual quote (above) to strongly suggest that (his actual quote has remained the same, and is above).

Indeed, the 92-page PDF contains extensive references to earlier decisions, precedents, and statutes, all of which are presented to paint the CRB’s increases as unfounded.  “The [CRB] Majority adopted a rate-setting methodology that is virtually identical to the one this Court has rejected,” the appeal brief declares.  “The Majority here examined multiple expert models, rejected critical elements of each, and then nonetheless used certain inputs and outputs of those models to set the ‘bounds’ of a ‘zone of reasonableness.’

“Then, without explanation, it simply took the midpoint between the two ‘bounds.'”

So, what is the perfect rate-setting resolution?

The answer, according to the appellant group, shouldn’t be the result of the CRB’s earlier, haphazard process. “The Board must carefully examine the relevant expert methodologies, resolve competing arguments about their validity and coherently explain its ultimate rate-setting decision,” the filing continues.

“Simply averaging the difference between proposals the Majority found deficient is a clear violation of the rate-setting process.”

That is just one of numerous arguments advanced to discredit and challenge the CRB’s earlier methodology for increasing mechanical streaming royalty rates.

The complete filing, which contains some redactions, is here.