After Helping to Save SoundCloud In 2017, Chance the Rapper Hits 1 Billion Streams on the Platform 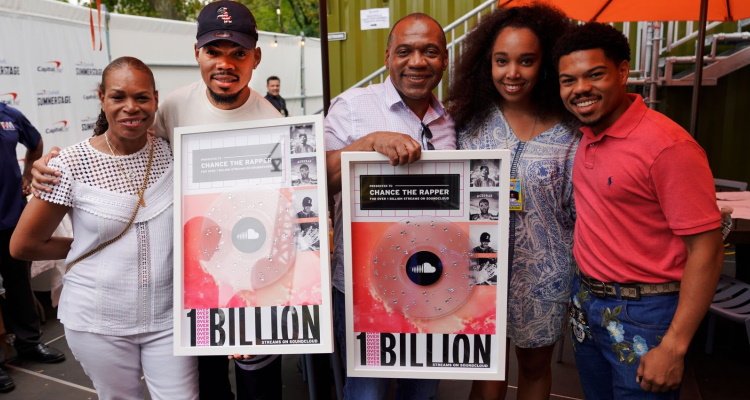 Chance the Rapper is the first independent SoundCloud creator to hit 1 billion streams, according to the company.

SoundCloud held a special event to present Chance the Rapper with two plaques during a Good Morning America concert this week.  SoundCloud’s Global Head of A&R and Label Services Lisa Ellis and President Mike Weissman were on hand to give the award.

Chance the Rapper’s first upload to the platform was over eight years ago, taken from his #10Day mixtape.  His latest release, The Big Day, arrived on July 26th and marks the artist’s first proper studio album.

The Chicago-born rapper has been an ardent supporter of SoundCloud throughout his career, long before the rapper enjoyed worldwide success.  Before his debut album this year, most of Chance’s music came out through online mixtapes.

SoundCloud remains one of the foremost destinations for music fans, but in 2017, the site was in serious trouble.  SoundCloud fired 40% of its staff and the company only had fifty days left in cash reserves, according to reports (including ours).

Things got so bad for SoundCloud that Twitter wrote off a $70 million investment in the platform. Twitter invested in the platform in 2016 via the Twitter Ventures unit, but that money quickly became cash-burn.

Twitter valued the deal at over $700 million, but at the time of the write-off, Twitter wrote that the money is “not expected to be recoverable within a reasonable period of time.”

At the platform’s darkest hour, Chance the Rapper wrote — ironically, on Twitter — that he was “working on the SoundCloud thing” without disclosing more details.  Exactly what happened behind the scenes is unclear, though soon thereafter, Chance and Young Thug released “Big B’s” on the platform, which drove massive amounts of traffic to the site.

He also released his project Coloring Book for free on SoundCloud.

Eventually, investors ousted founder Alex Ljung and replaced him with Vimeo CEO Kerry Trainor. After the new CEO and a $170 million investment, SoundCloud seems to be sitting in a better place. Trainor has helped to buoy the service around artists, and the past two years have witnessed the growth of ‘SoundCloud Rap’ as a bona fide sub-genre.

Indeed, SoundCloud Rap has helped to propel several grassroots rappers, with Lil Yachty, 6ix9ine, and Post Malone all gaining fame on the platform.