In the Wake of a DMCA Copyright Extortion Plot, YouTube Takes Legal Action 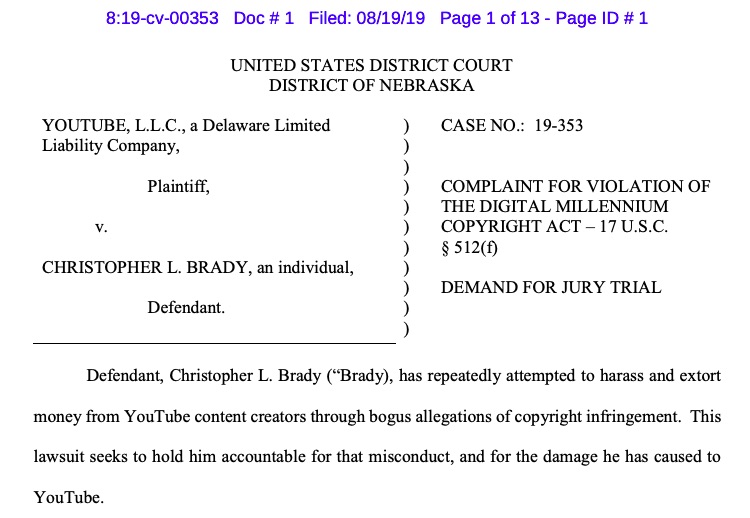 YouTube is suing Christopher Brady, based on allegations that Brady attempted to extort money from other YouTube users by threatening them with copyright strikes against their accounts.

YouTube is targeting Brady for exploiting the Digital Millennium Copyright Act, or DMCA, specifically to file false claims and subsequently terrorize content creators.  According to the lawsuit and various reports, they are seeking compensatory damages from Brady in the hope that this dissuades others from attempting to follow in Brady’s footsteps.

The video giant filed the action in the U.S. District Court for Nebraska, with a demand for a jury trial.

“Defendant, Christopher L. Brady (“Brady), has repeatedly attempted to harass and extort money from YouTube content creators through bogus allegations of copyright infringement,” the complaint begins.  “This lawsuit seeks to hold him accountable for that misconduct, and for the damage he has caused to YouTube.”

The lawsuit alleges that in January of this year, Brady asked YouTube to remove a number of videos from its platform because of copyright infringements.

YouTube complied in accordance with its policy of DMCA compliance, and removed Minecraft videos that were produced by users named ObbyRaidz and Kenzo.

But YouTube says that Brady did not stop there. Brady further sent notices to both account owners and threatened to issue further copyright infringement requests if they didn’t pay him sums of money that varied from $75 to $300. Such requests would have further resulted in what is known as “third-strike” violations and would have potentially resulted in both having had their YouTube accounts suspended.

The suspension of an account, even if temporary, can devastate the owner and immediately impact audiences and revenues.

Both ObbyRaidz and Kenzo say that they were only able to stop Brady when they openly talked about what Brady was doing to them in their videos. ObbyRaidz insists that YouTube ignored all his requests to take action until that point.

The video giant has indicated that Brady went after other users as well.  They further believe that Brady’s actions were at least in part driven by “his failings in his Minecraft interactions.”  YouTube also states that Brady used 15 different identities when extorting money from users and that the company has had to spend considerable sums of money to investigate all of them.

YouTube’s filing against Brady can be found here.