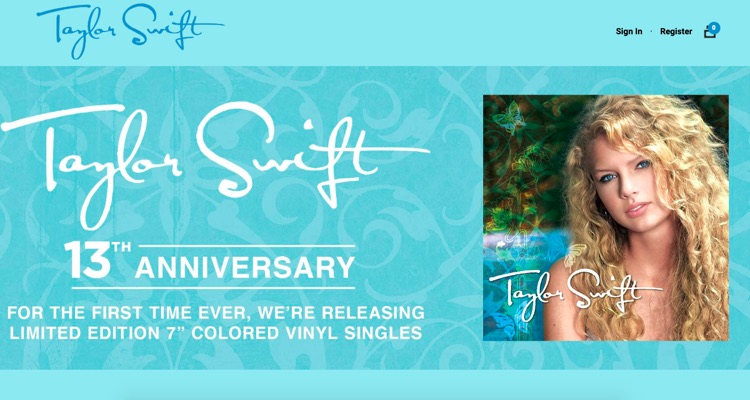 Big Machine’s vinyl re-release of Taylor Swift’s debut album, one of several albums Swift is planning to re-record and re-release on her own.

Earlier today (August 22nd), Taylor Swift confirmed during an interview with Robin Roberts on “Good Morning America” that she intends to re-record her first 5 albums so that she can gain control over the songs’ master recordings.
This follows earlier comments on “CBS Sunday Morning” indicating that re-recordings were happening.

During the “Good Morning America” interview, Swift indicated that her contract allows her to re-record the 5 albums beginning in November of next year, and this is when she plans to start the process.  She further indicated that she’s pumped up about the effort — and damn serious about doing it.

The re-recordings would likely flood platforms like Apple Music and Spotify, resulting in duplicate versions and lots of confusion.   The move, if successful, is almost guaranteed to diminish the value of the original catalog, and could spark legal warfare over Swift’s right to re-record.

Swift went on to say that she will be re-recording the music because she feels that music artists should have the right to their own music, which is currently not the case with her previous records.

Those recordings now belong to music manager Scooter Braun, whose Ithaca Holdings bought the rights to Swift’s recordings this past summer through the purchase of Scott Borchetta’s Big Machine Label Group. Ithaca Holdings reportedly paid $300 million for the purchase, with a large percentage of that price predicated on the long-term value of Swift’s intellectual property.

In reaction to the deal, Swift fumed at Braun in a Tumblr post, calling the deal her “worst-case scenario.” She also accused Braun of having previously bullied her through the actions of Justin Bieber and Kanye West, who are clients of Braun.

Swift will not have to worry about the ownership of her 7th album, which is called Lover and which will be released on August 23rd, as she told Roberts that she will have full control over its master recordings.

This news generated a burst of applause from Swift’s fans, who were watching the interview live in New York’s Central Park.

Taylor Swift is one of the biggest-selling music artists of all time. During her career, she has sold 150 million singles and 50 million albums. She has also won 10 Grammy Awards and numerous other awards and accolades, including being named by Time magazine as one of the most influential people in the world on multiple occasions.

No response yet from Braun, Ithaca Holdings, or Scott Borchetta.