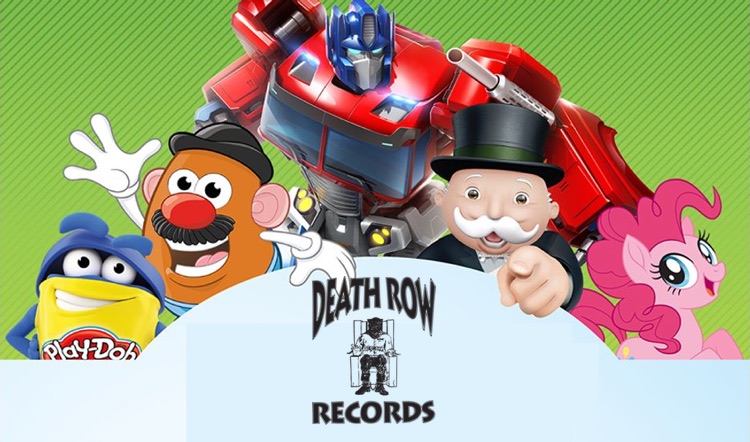 Hasbro’s purchase of Entertainment One for the Peppa Pig franchise means they now own Death Row Records.

But eOne also has a massive independent music arm.

eOne Entertainment’s music division brought in nearly $79 million in annual revenues last year. That’s roughly 7% of the total eOne gross.  Which brings us to our fun fact: back in 2013, eOne acquired the catalog of Death Row Records, which was forced to declare bankruptcy in 2006.

All of which means the new acquisition puts Hasbro in charge of Death Row Records.

It’s not a far stretch to say that Hasbro and Death Row Records make strange bedfellows. The label is home to classic rap albums from artists like Dr. Dre, Tupac Shakur, and Snoop Dogg.

Death Row was founded by Suge Knight and Dr. Dre in 1991. Suge Knight is currently serving a 28-year prison sentence for a fatal hit-and-run in 2015. Suge Knight backed his pick-up truck over his victim before pulling forward over him again.

Dr. Dre, one of Death Row’s finest exports, is also notoriously violent and misogynistic.  The rapper proudly pled guilty to beating up MTV’s Dee Barnes in a gruesome nightclub attack, dragging the VJ down a flight of stairs by her hair — all for a mildly critical episode about N.W.A.

But Knight and Dre are only one facet of the brutality of Death Row. The label is notorious for being one of the most successful gangsta rap labels of all time, with lyrics that created massive heat for mega-corporation Time Warner. That is, heat from members of U.S. Congress. Beyond that, Knight was notorious for running Death Row like a criminal enterprise, with violent beat-downs and other forms of coercion used to ‘negotiate’ contracts.

Hasbro CEO Brian Goldner was pleased as kittens with the acquisition, though he didn’t even mention Death Row in his statement to the press.

In all seriousness, The Peppa Pig IP pulled in a whopping $2.4 billion last year. So it’s no surprise that Hasbro was eager to acquire eOne, regardless of the baggage that comes along with it.

Plus, Hasbro could offload the full Death Row catalog if investors throw up a stink.  Hipgnosis, for example, has been snapping up the rights to catalogs left and right, Hasbro.  You’ve got options.