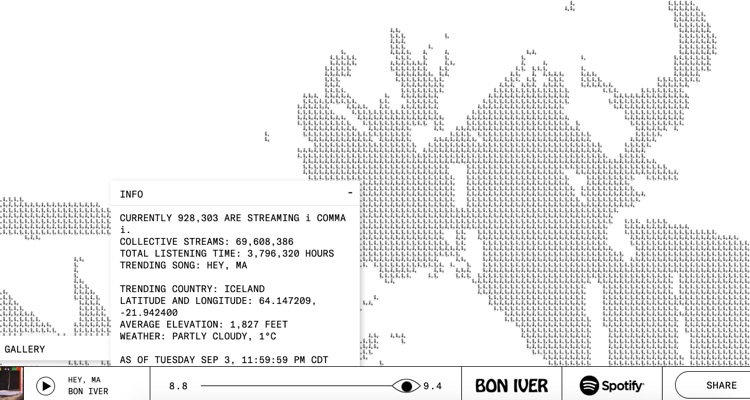 Not every musician is a big fan of streaming, especially those who were around before it all happened.  But some artists are truly embracing the culture and all its possibilities. This includes the indie folk band Bon Iver, who have partnered with Spotify to develop an immersive online experience in conjunction with the release of their new album, which is called i,i.

The experience is called “Viisualiizer,” and you really need to see it to appreciate it.  While playing one of Bon Iver’s trending new songs in the background, it displays a collection of artwork created with the letter i. Users can interact with this artwork by move their finger (or mouse cursor) across the artwork.

Viisualiizer also displays information about the song playing, such as how many people are streaming it at any given time and which country currently has the most streams of the song. You can further view streaming data on a daily basis as well.

Judging by current statistics, the experiment is a huge success. As of this writing, the album had nearly 70 million total streams and close to 4 million hours of listening.

Justin Vernon, who is the singer-songwriter of Bon Iver, says that the entire concept represents a new way of thinking about music, where “sharing and building” is more important than ownership.