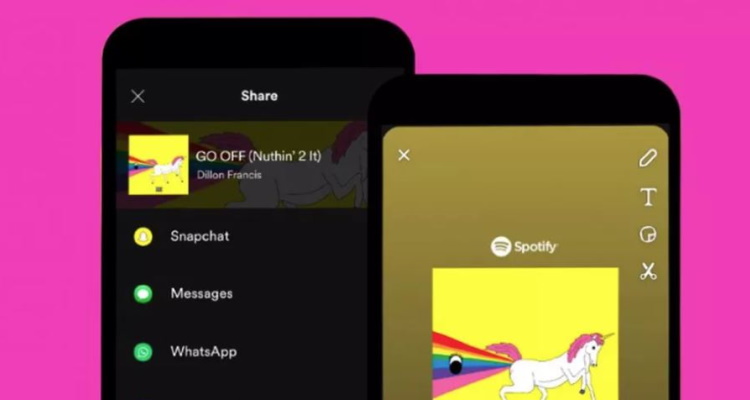 Spotify has finally launched its music share feature for Snapchat.

Instagram received music sharing months ago, allowing users to share their favorite songs. Snapchat’s integration allows users to create a snap that includes song info and album art. You can then send the snap to friends or directly to your Snapchat story.

Swiping up on a Spotify share allows Snapchat users to start listening directly. Direct sharing has become hugely popular on Instagram, so the Snapchat rollout comes as no small surprise. Spotify got around to releasing the feature for Facebook Stories last month.

The slow rollout to Snapchat may help marginalize the platform. TikTok has become massively popular among Snapchat’s critical teen demographic. Facebook also appears to be working on a new app called Threads that works suspiciously similar to Snapchat.

Spotify’s support for social media apps is just one way the company is trying to grow. Other ideas include extending the free trial offer to three months. That decision will probably impact the average revenue per user, though Spotify is rarely timid about blowing cash in pursuit of growth.

Spotify is also trying to get into the good graces of hardcore Android users with new updates.

After Spotify announced the removal of the home screen widget, they promised to bring it back. Now Spotify is also addressing issues with a key feature in Android 10.

Android 10 offers a media progress bar on notifications. Spotify’s implementation of this progress bar wasn’t seekable when Android 10 launched. But a recent update to the app has changed that function, so the progress bar is now seekable. Spotify was quick to respond to user complaints about the issue, which is always good to see.

Also of note is that the home screen widget has returned, so Android power users can rejoice.