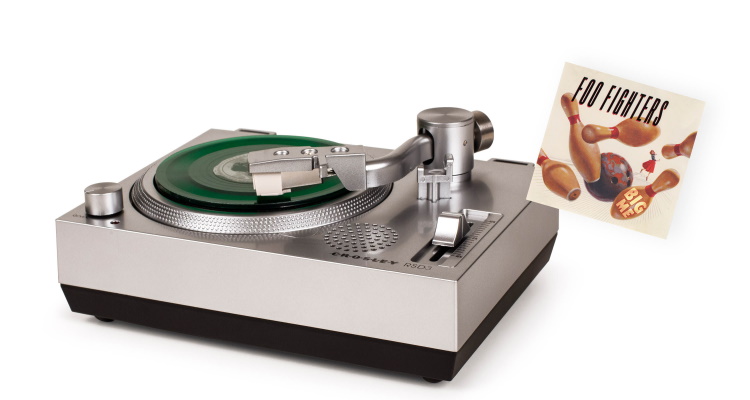 Record Store Day is now trying to popularize a niche vinyl format with new releases for the ‘RSD3 Mini Turntable’.

Vinyl sales are now threatening to overtake CDs — for the first time since 1986.  So maybe this is the perfect time for a vinyl novelty.   The tiny, 3″ vinyl format was first popularized by The White Stripes frontman, Jack White. White’s label ⁠— Third Man Records ⁠— imported the format from Japan for limited edition singles.

The original 3″ vinyl player was a cheap toy from Japanese toymaker Bandai. The format never caught on beyond White Stripes fans, but Record Store Day is hoping to change that.

The four new records will go on sale in record stores on October 18th. That set will include the following classic rock singles:

Each release contains a record, artist bio, and a fold-out collectible poster of the artist.

Also trying the format out are the Foo Fighters, who pressed 5,000  “Big Me” 3″ RSD3 singles earlier this year (pictured above). The Foo Fighters release was packaged with the original, numbered run of the RSD3 mini-turntable.

It’s hard to tell whether this niche format will catch on a second time around ⁠— perhaps vinyl fans are more eager for obscure formats in 2019.  One downside risk is that 3″ could muddle the market for 45s, especially among younger buyers.  But let’s see how it goes.