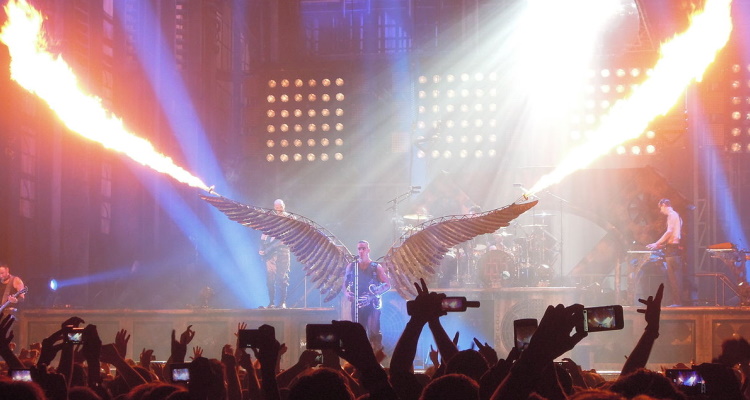 A Hungarian stadium was forced to apologize to residents of Budapest for non-stop, blaring Rammstein on repeat.

After a speaker test malfunctioned, a track from German raging rockers Rammstein was blasted for hours. Residents near the Puskas Arena complained about the noise.  Rammstein’s recently released “Deutschland” song played on repeat throughout the night.

The ‘accident’ sounds suspicious, though somehow, a blaring speaker system went rogue.  And nobody slept as a result.

The arena owners issued an apology to residents on Facebook Tuesday morning. The owners conceded an “unpleasant noise” could be heard for too long due to a “technical error.” The owners report that the contractor has taken steps to ensure the issue doesn’t happen again.

“We apologize to the residents of the surrounding streets for any inconvenience this may have caused!”

The 67,000 capacity stadium will be opened in mid-November to host a football match. While the incident is unfortunate, it highlights how annoying big stadiums can be.  And humans aren’t the only ones affected: Miami’s Ultra festival Virginia Key location, for example, could be harming marine life. The 860-acre island is home to a nesting habitat for endangered turtles and other animals.

Ultra was moved from its 18-year home at Bayfront Park amid complaints about noise and traffic. Now marine biologists worry about the effect it could have on the wildlife. The noise could be louder when it enters tanks because the water amplifies sound.  The concern means Ultra will return to its downtown Miami location.

As long as live music shows exist, noise complaints will happen.  But at least in this case, the complaints were warranted. Even if you like Rammstein, at some point you still need some sleep.

Most festival organizers want to skirt around noise complaint issues. Community complaints can be a significant road bump in event planning.

Just last week in Louisville, Kentucky residents filed over 60 noise complaints about the Highlands Festival. Others are fine with the music but hate the traffic the extra attention brings in.