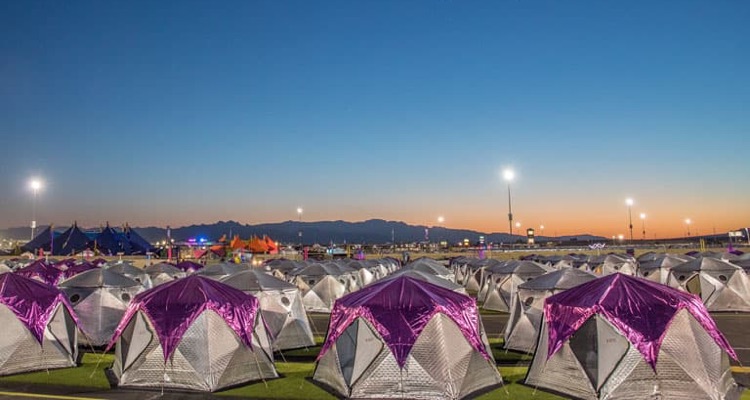 Insomniac has donated 1,000 tents from Electric Daisy Carnival to Hurricane Dorian victims — and is calling on fans to pitch in.

Insomniac Events, the concert promotion company that oversees EDC, is now shipping its protective tents to residents of the Bahamas who were displaced by Hurricane Dorian.

Officially identified as Shiftpod2 Advanced Shelter Systems, the air-conditioned, weather-resistant tents were promptly donated by Insomniac’s CEO, Pasquale Rotella, when he received a call from executives at the Love and Life Foundation, which was already providing support to Bahamian victims.  Each of the tents requires just four minutes to put up or take down, features seven-layer insulation, and can be used by five occupants simultaneously.

Rotella dispatched 1,000 of the tents and a group of Insomniac employees that could help with the set-up process. The tents had previously been used to house attendees of Insomniac’s Las Vegas Electric Daisy Carnival (EDC). And as those who’ve slept in the units can attest to, their technical positives are outdone only by their comfort.

Insomniac is also calling on music fans to lend their support to those who’ve been affected by Hurricane Dorian. The Insomniac Cares Bahamas Relief fundraiser, which is live on GoFundMe, has set a goal of $100,000. Per the fundraiser’s description, “donations will go toward the purchase of generators, water purification devices, bedding, toiletries, and other supplies to help create a sustainable living environment for families.”

At the time of writing, Insomniac’s fundraiser had earned more than $12,500. Donations are continuing to pour in, and with several thousand dollars having been contributed in the 24 hours prior to this piece’s writing, there seems to be a good chance that the goal will be reached. Either way, meaningful support is being provided to Hurricane Dorian sufferers, and awareness is being raised.

Insomniac’s next event, EDC Orlando, is scheduled to take place between November 8th and 10th.