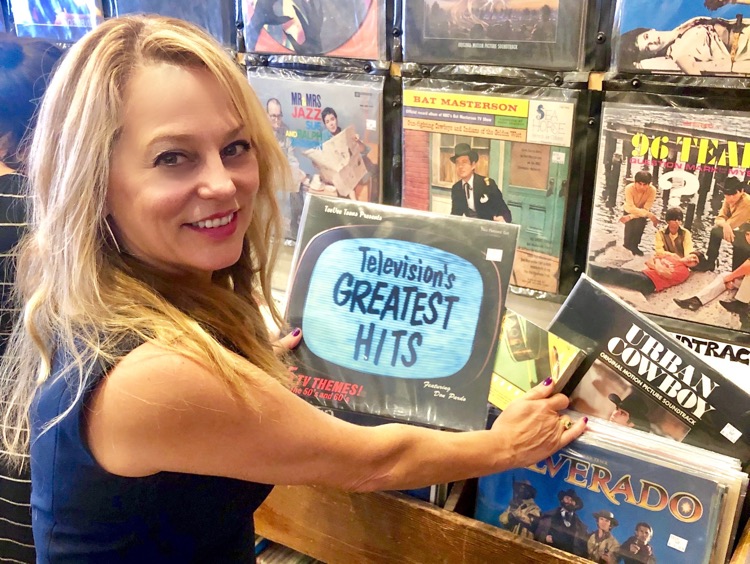 Spending time with Jennifer Freed, founder & CEO of Trevanna Tracks, can be a bit contagious.

You suddenly start to think that all the problems plaguing music licensing for film, television, and video games can actually be solved.

A longtime vet in the post-production film & tv space, Freed is deeply familiar with the problems facing music licensing for content — so she started an entire company to fix them.  Accordingly, the notorious headaches that accompany music licensing are simply recast as opportunities and problems to be solved.

Turns out the chaos isn’t so insurmountable, after all, at least with the right SaaS weaponry and personnel — and of course, an extremely upbeat demeanor (which Freed readily exudes).  Despite its relatively recent launch, Trevanna Tracks is already taming the lion with an elegant software solution that addresses the recurring problems that crop up in complex licensing projects.

For anyone working in the music licensing space, these chaotic problems will seem familiar.

Endless rights clearance issues, budgeting nightmares, and payment tracking problems can – at best – take the fun out of an interesting soundtracking job.  At worst, it can result in endless delays and wasted time.

For Freed, a multi-decade veteran of post-production accounting, this was her life.  “Sometimes we get elaborate Excel documents that have 12 columns. Music Supervisors call columns different things and they’re often in different orders. I’ve had some that have four columns, I’ve had some that don’t even total at the bottom,” Freed recently relayed at the Mondo.NYC conference in New York.  “So what we’ve really just done is given you a place to put everything that you need in one place for music licensing on a project.”

Then there are the show-stopping scenarios, in which productions can be placed in a penalty box if rightsholders aren’t licensed and paid correctly.

Just recently, DMN had the opportunity to chat with Freed at length about her mission with Trevanna Tracks. In the process, we discovered a company that’s quietly transforming decades of aggravation into a seamless workflow application that is quickly winning clientele and some pretty glowing testimonials, like that from Larry Weinberg, an attorney at Karol Williams PC.

“Having worked as a production attorney on more than 75 films and television programs, I can unequivocally say that one of the most aggravating and cumbersome aspects of such work is managing and delivering to distributors and networks the music licenses for those same films and programs.  So simple yet such a long time coming. Jennifer and her team at Trevanna Tracks have thought of every aspect for tracking, executing and delivering music licenses for filmed content.”

Jessica Dolinger, a Music Clearance and Licensing Consultant and owner of Cut Time Clearance, was equally enthusiastic.  “Trevanna Tracks is a quick, intuitive platform that makes license tracking and delivery a breeze,” she says.  “It’s easy to navigate and easy on the eye. Everything you need to execute is in one place and accessible from anywhere, anytime.”

Amazingly, Trevanna Tracks has only been around 3 years and is already working with some serious clientele, including top leaders in the streaming, feature film, marketing, and video game industries.

Astonishingly, music supervisors oftentimes still use actual pieces of paper to clear tracks.  That can get mountainous, with more involved productions requiring dozens of songs and their associated licenses.  But Trevanna Tracks takes the entire stack – paper or otherwise – and condenses it into a cloud-based management system that allows everyone to view license statuses, budget details, and other mission-critical stats as they move from consideration to implementation.

Perhaps most importantly, all of the musical works related to a project — which are invariably at different stages — are bubbled into a neat summary dashboard. 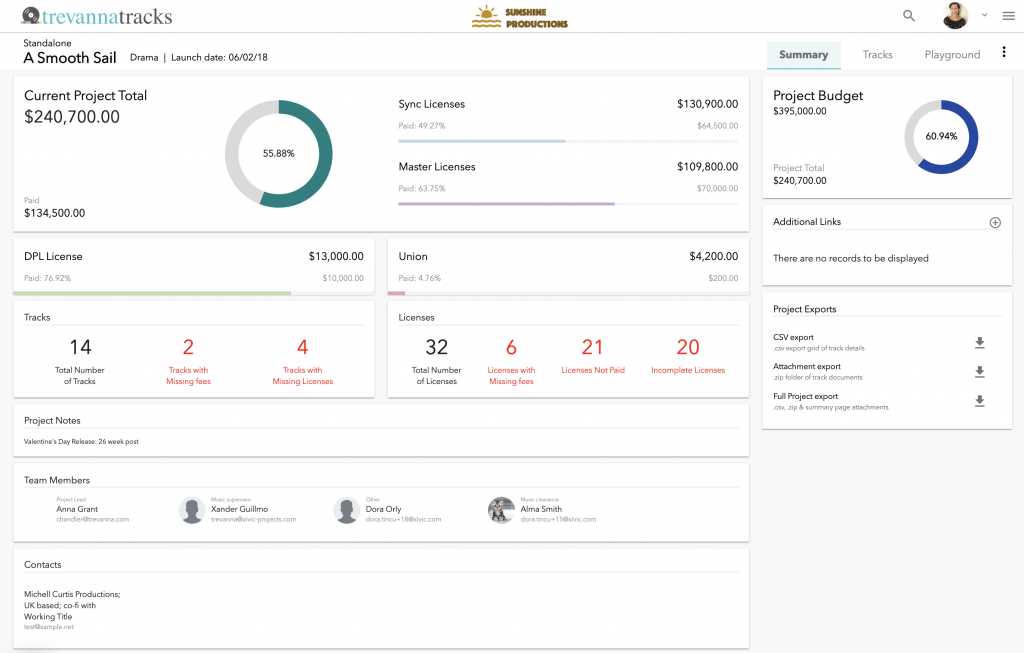 For those entrenched in the music licensing and post-production space, the summary page has the familiar publishing (sync) and recording (master) rights totals, as well as how the project stacks up against the total budget.

Digging down a level into the actual tracks themselves, the top-level dashboard shifts into an organized layout of rows and columns.  In the main view, tracks and their related deliverables are itemized, with everything from statuses, quotes, contracts, invoices, tax forms, and payment details included (i.e., the ‘paper’ referred to above). 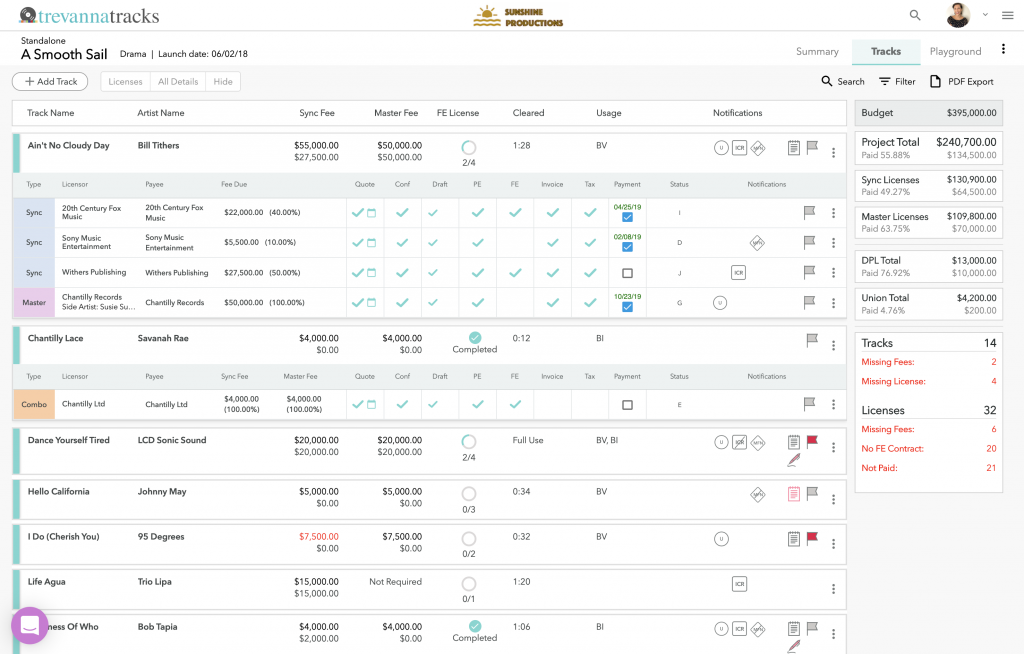 On the track level, details related to rights owners, license splits, and costs come into view.  These track level views are critical at multiple stages of the licensing process, especially if a contractual problem, disagreement, or other problem emerges.

In most situations, companies and their licensing managers are overseeing numerous productions, each with their own stack of songs and related deliverables.

A studio music licensing team can have more than a dozen employees, with multiple projects in process.  Enter multi-country rollouts, which describes practically every serious film & tv production today, and the level of complexity multiplies.

That calls for an umbrella, budget-focused view, which anyone across the organization (with the right permissions) can access. 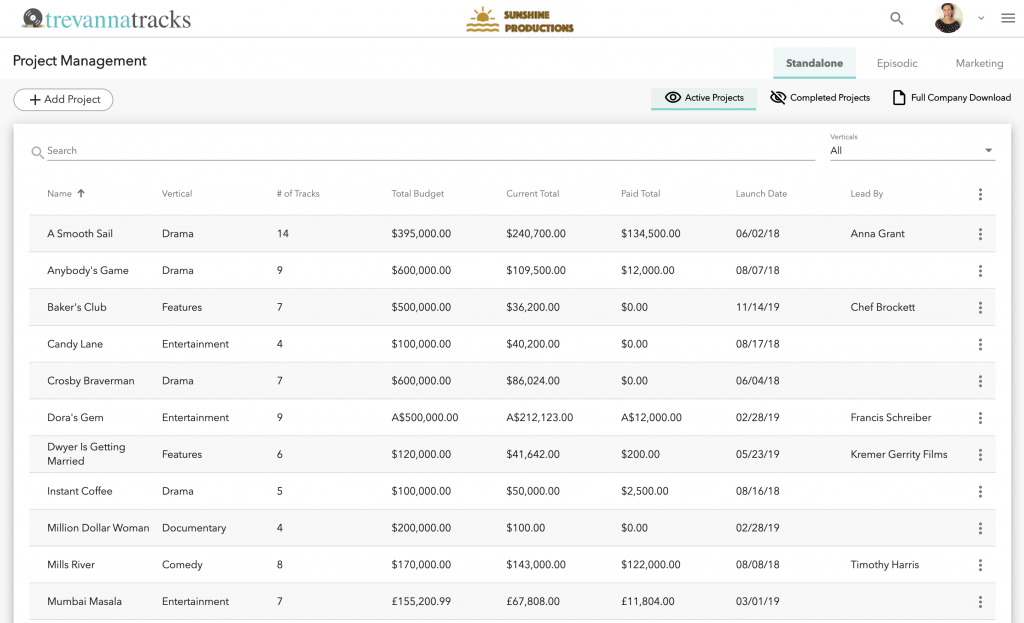 The not-so-secret formula is to first identify an extremely messy business area, then simplify it with an elegant SaaS (software as a service) solution.  That process has already revolutionized broad business process areas, including shipping logistics and manufacturing.

That raises the question of why this wasn’t invented earlier.  Perhaps music licensing and sync have simply been too niche or inaccessible?  Whereas sync revenue is not as great as from DSPs, the right sync placement can be life-changing for an artist’s career.  Executives within the film and TV industries are simply just unfamiliar with the nuances of music licensing, much less the details of clearances and delivery.

Jennifer Freed’s pedigree in film & tv post-production put her in a unique position to identify this market gap.  Prior to creating Trevanna Tracks, Freed founded Trevanna Post, which is now established as the leading post-production accounting firm with offices in NY, LA & London.  That offered a clear glimpse into the pain being felt on the music licensing side, with Trevanna Post clients specifically asking for solutions to music-related woes.

“The motivation behind developing this platform was driven by the simple desire to have everyone working on a project be on the same page, literally!” Freed relayed.  “It was through first-hand experiences with projects of all sizes, identifying a need in the marketplace, and collaboration with many experts in the industry that I was able to create this robust platform.”

Whether Trevanna Tracks can help to grow the niche music licensing space is an interesting question.  But given the surge in content — and the mad rush to license music for all of it — solutions like Trevanna Tracks could finally liberate a sub-industry held back by logistical nightmares and archaic processes.

Perhaps the bigger mark of success is when Trevanna Tracks attains industry-standard status.  That’s certainly Freed’s ambition, and there’s already evidence it’s happening.  Look no further than Jennifer Schiller, a leading Music Clearance and Licensing professional, who now makes Trevanna a prerequisite:  “When I get hired on a film or television project, my first question is ‘Are you using Trevanna Tracks?’”